Qikiqtani General to link patient records with The Ottawa Hospital 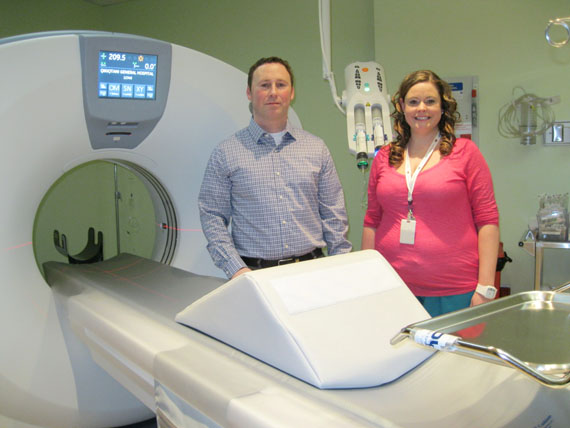 The $2.1 million “computed tomography” scanner has already helped diagnose 47 patients from the Baffin region in its first two weeks of use.

Doctors may now diagnose more complicated injuries and health problems such as cancers and strokes in Iqaluit, which could save patients from having to make lengthy trips to visit the Ottawa hospital system.

Plans to bring an advanced CAT or CT scanner to the Iqaluit hospital go back to 2007, when Qikiqtani General first opened.

Patients are “very impressed” by the equipment, said Jennifer Sharpe, manager of diagnostic imaging at the hospital.

“They’re very comfortable to be able to come to their own hospital, and get the exam done, versus going to Ottawa, and having to find their way around three huge hospitals,” Sharpe said Feb. 14.

In little more than a few minutes, patients lying on a diagnostic bed are slowly passed through a doughnut-shaped scanner that creates an image of all arteries, veins, bones and organs “which give physicians a better look at what’s going on inside the body,” Sharpe said.

Included with the equipment is a device called a “patient archive communication server,” another big advancement in patient care, said Martin Joy, director of health information with Nunavut’s department of health.

“This is where all the images go,” he said. “All the information flows from the physician’s desktop, anywhere in Iqaluit.”

Thanks to the server, doctors can have a diagnosis ready in Iqaluit within two hours, he said.

The communication server will be fully linked to The Ottawa Hospital by April this year.

This will bring patient-care response times down even further, said Dr. Sandy MacDonald, chief of staff for Nunavut’s department of health.

“That really is going to allow our physicians and nurse practitioners to have high-quality images sent in as short as an hour to 90 minutes to a specialist for immediate feedback and interpretation for the doctor,” MacDonald said.

“Eventually, we’ll also be able to bring our management of people with strokes up to what is the current standard in the South,” MacDonald said.

For now, the CT scanner has eliminated many unnecessary trips to Ottawa.

For emergencies, medical staff can assess less severe cases that can be treated in Iqaluit. More extreme injuries, such as head and neck fractures, are still sent to Ottawa for care.

“It reduces some trips to Ottawa, for sure,” MacDonald said. “It’s $25,000 a medevac – that’s a lot of money. You would only have to save $2 million of those dollars to pay for the CT scanner.”

The scanner will serve patients in the Baffin region at the outset. Plans to include patients from the Kitikmeot and Kivalliq region will depend on hospital capacity, Joy said.

The hospital will soon add two technicians to run the system, Joy said.

“When you put something new like this in, it really stretches your boundaries,” he commented. Nunavut, unlike other parts of the country, relies on satellite connections.

“No one else in Canada operates a CT over a satellite network,” and equipment vendors never had to deal with that before, he said.

“So you have to educate (them) as they come through. And when something like this works out, it’s absolutely impressive,” he said.