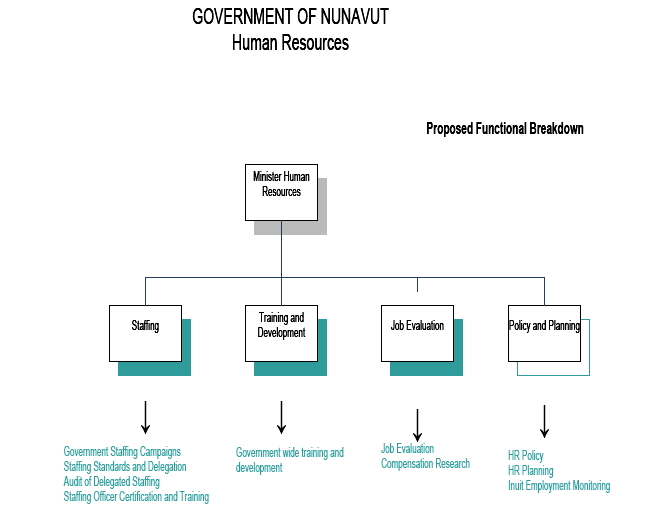 A graphic pulled from the 2011 Ken Lovely report entitled “A Framework for Results” which shows how a human resources department would remain in place with certain functions divvied up among other departments. 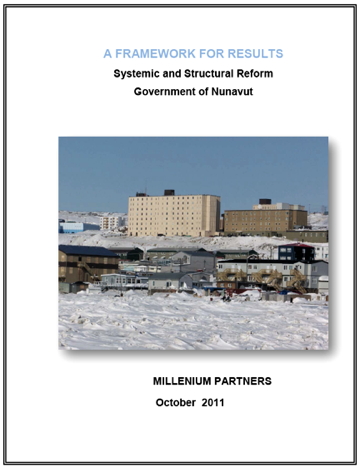 This report, commissioned by the Government of Nunavut in 2011 after a critical report on human resources from Canada’s Auditor General, was handed out to sitting MLAs in 2012 but required an access to information request to be made public again in 2015.

Keith Peterson, Nunavut’s finance minister, told fellow MLAs repeatedly during the fall 2015 sitting of the legislature that a private consultant’s report led, in part, to the territorial government’s 2012 decision to dissolve its Department of Human Resources.

But that report, which Peterson refused to share with MLAs in 2015 and which Nunatsiaq News obtained only after filing a request under the Access to Information and Protection of Privacy Act, did not recommend dissolving the standalone Department of Human Resources.

In fact, the report makes the opposite recommendation.

“In spite of calls for its dissolution, human resources would be retained as a separate department with some of its functions transferred to [the finance department] and a major reform of residual functions,” says the report, authored by Ken Lovely of the Millenium Partners consulting firm in 2011.

“The department will be required to implement comprehensive reforms to its recruitment and job evaluation process so that it can effectively serve the organization,” Lovely writes later in the report.

The Auditor General of Canada gave the Government of Nunavut failing grades in its 2010 report on the government’s handling of human resources, especially on how long the GN needed to fill important public service positions.

The following year, the GN commissioned Lovely to review the existing structure of government departments. Peterson later told MLAs that the report’s findings led, in part, to the GN’s decision to fold the HR department.

Iqaluit-Niaqunnguu MLA Pat Angnakak said in the house Oct. 22 that getting rid of the HR department has likely added to the GN’s staffing problems, especially when it comes to dealing with workplace harassment.

In that series, three former GN employees said that harassment on the job led to serious health issues as the GN sat idly by.

“Would the minister acknowledge that the elimination of the Department of Human Resources has had a negative impact in a significant number of areas?” Angnakak asked Peterson Oct. 22.

Peterson replied that after the Auditor General’s 2010 report, the GN began “a lot of consultations” on restructuring government departments.

The only consultation Peterson refers to specifically is Lovely’s report.

“The recommendation was to dissolve the Department of Human Resources,” Peterson said Oct. 22.

When contacted by Nunatsiaq News for a copy of the report, a finance department representative said the report was “confidential advice to Minister Peterson and we unfortunately cannot share it.”

As it turns out, Lovely’s review did not recommend that the HR department be dissolved.

According to the terms of reference for that review, the GN had asked Lovely to recommend improvements to the government’s structure, programs and processes in order to increase efficiency, reduce costs and free up funds for high-priority initiatives while streamlining and simplifying bureaucratic processes.

Lovely addresses the failings of the human resource department extensively throughout his 60-page report.

“Human resource support systems in recruitment and job evaluation act as barriers to success,” Lovely writes, adding “the government suffers from serious human resource capacity shortfall and there is no cohesive strategy to improve it.”

Lovely recommends the labour relations function be transferred from HR’s staffing division to the finance department — a recommendation that the GN did eventually implement.

Lovely also recommends that staffing responsibility be “delegated immediately to the departments of finance, community and government services, education, health and justice” — another recommendation which the GN followed.

But Lovely goes on to recommend that the staffing division of the HR department continue to develop staffing standards, audit hiring departments and train staffing officers.

Instead, the GN dissolved the HR department, and spread its training, staffing and audit functions between the finance department and the Department of Executive and Intergovernmental Affairs.

“Training and development are in one area, but staffing is in another. These things are fundamentally linked and I will continue to push for this matter to be reconsidered,” she said.

Later in the fall 2015 session, Angnakak introduced a successful motion to refer a number of human resource documents to the committee of the whole for review.

Those documents will be reviewed during the winter 2016 sitting of the Legislative Assembly, which gets underway Feb. 24.