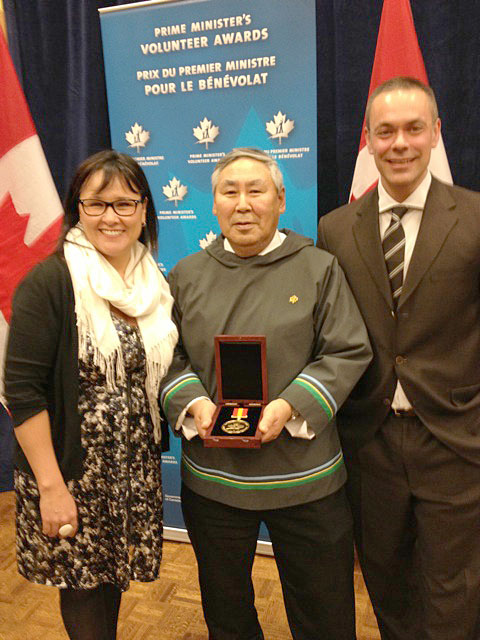 Josie Enuaraq, chair of the Ilisaqsivik Society’s board of directors, and Jake Gearheard, the group’s executive director, with Nunavut MP Leona Aglukkaq Dec. 14, following a ceremony during which Prime Minister Stephen Harper presented Ilisaqsivik with a volunteer award for social innovation. (PHOTO COURTESY OF SHARI GEARHEARD)

Prime Minister Stephen Harper presented the award to Josie Enuaraq, the chair of Ilisaqsivik’s board of directors, and to Jake Gearheard, the organization’s executive director, at a ceremony on Parliament Hill.

The Nunavut recipients appear on a list of 15 not-for-profit organizations, businesses and individuals from five Canadian regions, as well as two national recipients.

“It is a privilege to honour today’s remarkable award recipients who, through their tireless efforts and innovative partnerships, are making Canada a better place to live,” Harper said in a statement.

The Prime Minister’s Volunteer Award program was created in July 2011. The recipients honoured on Dec. 14 are the first to receive the award.

Founded in 1997, the Ilisaqsivik Society has provided social services and employment to hundreds of Clyde River residents.

In December 2011, Tides Canada honoured Ilisaqsivik by placing it on a top-ten list of organizations devoted to social and environmental issues.

And in June 2010, Ilisaqsavik received a $10,000 prize from the Kaiser Foundation for making an exceptional contribution in the fields of mental health and addictions.

But despite the respect that it’s gained over the years, Ilisaqsavik, which relies on a patchwork of short-term territorial and federal contributions to pay its bills, continues to struggle financially.

The Prime Minister’s Volunteer Award comes with a $5,000 prize.