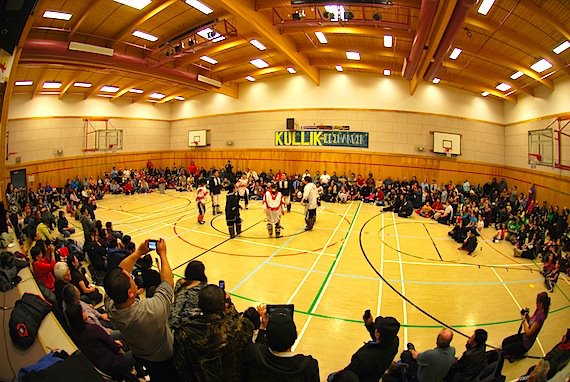 On Nov. 23 delegates at the Nunavut Tunngavik Inc. Annual General Meeting in Cambridge Bay took a break for an evening of entertainment from performers around the Kitikmeot region. (PHOTO BY P.J.AKEEAGOK, COURTESY OF NTI)

With the Nunavut Trust’s earnings threatened by the global economic crisis, Nunavut Tunngavik Inc. and the territory’s regional Inuit associations plan to look at ways of cutting back and saving money.

“With the world economic crisis, Nunavut Trust may not be able to provide the level of funding requested” — that was the sobering news delivered to delegates this week during NTI’s annual general meeting in Cambridge Bay, repeated in a NTI resolution.

Pope Benedict XVI called Nov. 24 for the “courage of brotherhood’ in the face of the global economic crisis, as delegates to the NTI meeting vowed that same day to trim costs.

During the coming fiscal year NTI and the regional Inuit associations will receive about $42 million, just slightly more than the $41.3 million of 2009 — that’s much less than the $56.6 million the Nunavut Trust handed out in 2007.

The amount to be transferred for 2012/13 will feel like even less, due to inflation.

This means that NTI and the regional associations will face rising costs with less money, and will look to resource revenue deals, set out in the policy approved at the recent AGM, to cover the shortfall.

Nunavut Trust has also faced lean years in the past, and tried to take moves to protect the $1.1 billion compensation money that Ottawa gave Inuit under the Nunavut Land Claims Agreement.

In 2007, the trust received its last installment to invest, worth $33.9 million, from the federal government, which started making annual payments in 1993.

To date, the Trust has preserved all the money paid to it by the federal government and also set aside a $197.8 million dollar reserve to use as a cushion if its investments suffer any losses.

Money earned by its investments is distributed annually to NTI and the three regional Inuit associations to pay for their operations.

Since 1993, in addition to maintaining its assets, the Nunavut Trust repaid $53 million to the federal government to cover the cost of negotiating the Nunavut Land Claim Agreement and paid out more than $600 million to Nunavut Inuit organizations. Of this, about $100 million went as loans to beneficiary organizations, which are to be repaid.

In its early years, NTI had to borrow from the Nunavut Trust to pay for start-up costs. Then, in 2002, 2003 and 2004, the Trust’s investment earnings fell sharply. Because there were little earnings to distribute, the Trust made loans to NTI instead, depleting its capital.

The Trust also experienced rough years from 1994 to 1997. The Trust cut the percentage of its total assets that it hands out from a high of 29.6 per cent to four per cent so that its capital assets remain intact.

The approved funding request from Nunavut Trust for 2011-12 is listed below.

NTI will hold its AGM next year in Iqaluit.