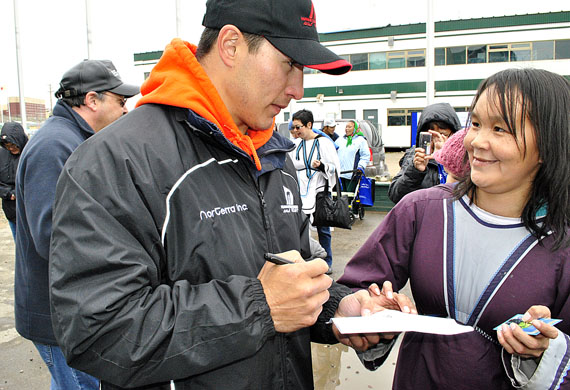 Eastern Nunavut hockey fans can rejoice — National Hockey League player and the Inuit world’s most-celebrated athlete, Jordin Tootoo, is making his way back to the Baffin region this July as part of the Nunasi Corp.’s 2013 community tour.

“He’ll share his message about setting goals and working hard to achieve them,” said Nunasi’s director of communications and marketing, Franco Buscemi.

The promotional tour started almost a decade ago in 2004.

This is the first time Tootoo will do the annual tour as a member of the Detroit Red Wings, having previously played for the Nashville Predators since 2003.

Tootoo, 30, endured a disappointing playoff series with the Red Wings, playing only once for Detroit in a losing cause against the Anaheim Ducks.

He played six minutes and 24 seconds in a 3-1 loss, while picking up a two-minute minor penalty.

But Tootoo played the majority of the Red Wings’ regular season during an NHL season that was abbreviated by a lockout, playing 42 out of 48 league games.

Tootoo will talk about the importance of education, since his parents “always stressed to him how, when we were always down south playing hockey, that they wouldn’t let him advance without him graduating high school” said Buscemi.

Although Buscemi says Nunasi isn’t making a profit on these tours, the Nunavut Inuit birthright corporation will also be promoting Nunasi and its subsidiary companies, “to let people know about employment opportunities, training opportunities and different programs.”

Nunasi is currently undergoing a major restructuring that started last year, and July 22 the company announced it is closing down its corporate office in Yellowknife, and moving its vice-president of finance to an office in Ottawa.

Tootoo will make a separate visit to Iqaluit July 31 as a guest of Canadian North.

The schedule for the tour is as follows: