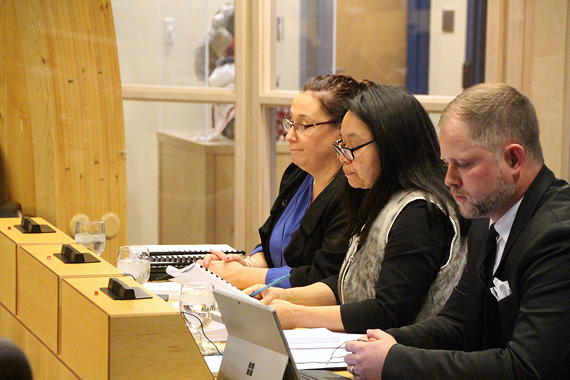 Madeleine Redfern, chair of Nunavut’s legal services board, sitting centre, says the need for legal aid is increasing in the territory, and funding for the service isn’t keeping up. (PHOTO BY BETH BROWN)

That’s the message that Madeleine Redfern, chair of the Legal Services Board of Nunavut, brought to the territory’s legislature on Monday, Oct. 1.

Currently, the board lacks funding to act on its Inuit education and employment plan, or to hire a director who could support Inuit community court workers, said Redfern.

The only reason the organization ran a surplus last fiscal year is that its offices are understaffed, she said.

Redfern spoke before the legislature’s standing committee on oversight of government operations and public accounts, which is reviewing the most recent annual report of the legal services board.

The board has been responsible for its own financial management since 2010. These hearings mark the first time the entity has reported to the legislative assembly.

The legal services board spent $11.3 million in 2016-2017. The organization has an annual budget of $11.8 million that is approved for the next two years by the Government of Nunavut’s Department of Justice. That budget has doubled over the last eight years.

“We’ve only been able to come under budget because we didn’t have all positions filled,” said Redfern, adding that an increased need for legal aid services in Nunavut continues to stretch the organization’s resources.

“Approximately 90 per cent of matters appearing before the Nunavut Court of Justice are legally aided,” Redfern said.

The standing committee is reviewing the legal services board’s governance and legislation, financial management and human resources, public legal education, and board efforts to further access to justice for Nunavummiut.

In discussions on staffing, Redfern said there is one obvious challenge the board cannot control.

Later, Redfern said it could be hard for students currently studying law at the Nunavut Arctic College to practice law in Nunavut unless enough articling positions are created for graduates.

There are currently 24 community court workers in Nunavut, though positions are vacant in Whale Cove, Coral Harbour, Grise Fiord and Chesterfield Inlet.

To support those staff, the legal services board has identified the need for an employee who would be called an “access to justice director.” But without a budget increase, the board can’t fill that position.

The board is also looking for Inuit employment funding to support legal education.

But it has been told it isn’t eligible for Inuit employment funds used by Government of Nunavut departments, because the board is independent from government.

“We have yet to get funds. We’ve tried,” Redfern said.

The legal services board has clinics in Iqaluit, Rankin Inlet and Cambridge Bay. Offices in Rankin Inlet, Iqaluit and Gjoa Haven deal with administration and financial matters.

Members of the legal services board are primarily Inuit, but the board has struggled in past to recruit members from across the territory, said Redfern, who has chaired the board for seven of the last 10 years.

“It’s important to have stability and consistency,” she said, adding that there has recently been high turnover in other board positions.

Following its review, the standing committee will have 120 days to provide the legal services board with a response, in the form of a written report.