The goal: to meet Nunavut needs and lower drop-out rates 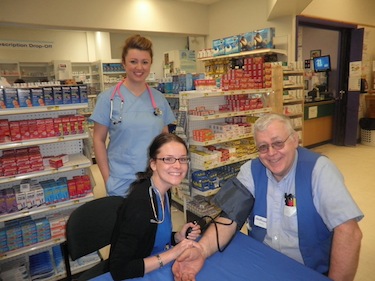 The pilot project comes after feedback from many Inuit people and patients who say they would like nurses to speak to them in Inuktitut.

“We have an opportunity now to offer that, we’re really happy about [it],” nursing instructor Sally Naphan said.

The course will be good for non-Inuktitut speakers to familiarize themselves with the language, and for those who do speak Inuktitut to brush up on the language, Naphan said.

The four-year bachelor of nursing science program is also making a university-level English course mandatory, because some entering the program lack experience in writing papers.

That’s due to an overall lack of academic preparedness, said Naphan, citing Whale Cove as an example of a community that didn’t have Grade 12 until 2005.

Taking the University of Regina English course will help get nursing students ready for the big national exams at the end of the year.

“You have to pass that in the end,” Naphan said.

That course will also be taught with NTEP students.

These new courses reflect the stricter requirements the nursing program plans to implement.

For example, all 15 new students, out of a total of 24 students now in the program, have finished Grade 12.

But despite being satisfied with the number of new students, 11 of whom are Inuit, Naphan said she hopes not to lose any more students to attrition.

The drop-out rates are high, though she did not offer any numbers, saying only that “we’re hoping this year we’re going to be counteracting that a bit.”

Social issues feed the high drop-out rates among nursing students, Naphan said: “maybe they have responsibilities, or they have children.”

However, the nursing program is raising the bar when it comes to its standards and credibility, she said.

“We’re always revamping it,” Naphan said, including the new English course and the Inuktitut course.

Applicants of the health foundation program, designed for students who don’t quite have the right requirements, must also have completed Grade 12.

A shorter two-year practical nursing diploma program, originally set to start this September, won’t run due to lack of interest.

It needed a minimum of six people to go ahead.