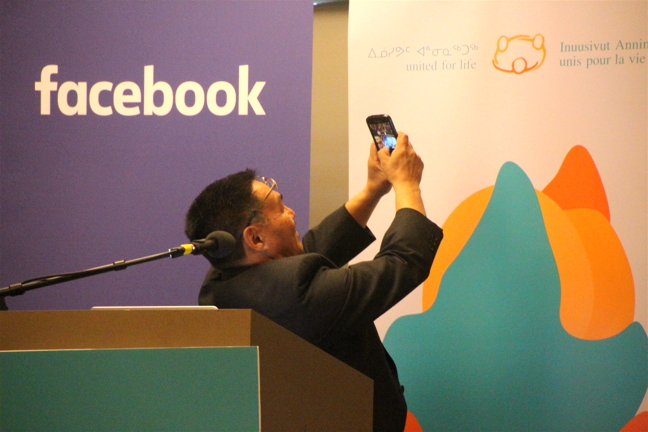 Joanasie Akumalik, who was the emcee for the June 26 “Boost Your Community Summit” event at the Frobisher Inn, takes a selfie with the crowd who gathered for the release of the territory’s five-year suicide action plan. (PHOTOS BY BETH BROWN)

A five-year plan for suicide prevention in Nunavut is calling on communities to take action.

So instead of direction, the Government of Nunavut, Nunavut Tunngavik Inc., the Quality of Life Secretariat and the Embrace Life Council will offer money and elbow grease to strengthen existing efforts and to make new preventative measures a reality.

The groups released their 2017 to 2022 action plan, called Inuusivut Anninaqtuq, or United for Life, June 26, during a “Boost Your Community Summit” at the Frobisher Inn in Iqaluit.

The action plan provides $16 million over the next five years for community programs that support suicide prevention. The money comes from a five-year fund of $35 million that the GN earmarked for mental health in their last budget.

“Nunavut is a very small territory but we are doing the best we can to help our people,” said summit MC Joanasie Akumalik, who shared stories about his son, who died from suicide.

While announcing the launch of the action plan, Health Minister George Hickes acknowledged that his family has also been impacted by suicide.

“Suicide is preventable and we are determined to make a difference in Nunavut,” he said at the summit.

Instead of perpetuating “cookie-cutter” approaches common in government projects, a community-led focus allows people in Nunavut to get help in the ways they need, said Hickes during media questions following the plan launch.

Hickes added that baseline health support exists in most communities. The new action plan will help municipal governments, wellness committees and non-profits make the most of existing resources by helping with grant applications and creating multi-year funding so programs have security and continuity, he said.

The suicide action plan stems from a suicide prevention strategy released in 2010, which was followed up by a coroner’s inquest in the fall of 2015. Not long after the inquest the GN said suicide was a crisis in the territory.

“The inquest and the jury’s recommendations caused a major remobilization of action and collaboration among partners,” states the plan.

• transmission of Inuktut and Inuit culture;

• supports for children and youth, grounded in Inuit culture;

• healing gatherings and support groups in all communities; and,

• more mental health services for all ages with an eye to involving community members and Inuit practitioners.

The plan cites a need for change across a sweep of sensitive areas for the territory such as social inequity, poverty reduction and crime prevention—but the plan also says changing such systemic issues must happen within families, friend groups and small communities.

The action plan’s architects consulted youth, elders and suicide survivors, who suggested the creation of a Nunavut Youth Council for NTI and regional Inuit associations, development of a suicide surveillance system, distribution of a community wellness newsletter, and the adoption of standardized Inuktut terms surrounding suicide.

Community programs supported by the action plan include Angunasuttiarniq, a harvesters education program run through the Department of Environment, a Youth Hunter’s Program run by the Arviat Wellness Centre, and the Kitikmeot Regional Language Revitalization Strategy.

“The more activities that there are in a community, the more health programs that there are in the community the less crime there is, and the less mental health calls that the police are getting. What I see from this [action plan] is that through time there is going to be less suicide,” said Michael Jeffrey, commanding officer for Nunavut RCMP “V” Division.

But right now, the numbers remain staggering: in 2016, 32 people died by suicide, the same number reported in 2015.

“We recognize this is a symptom of drastic changes that have occurred in our society and in our lifestyle,” said NTI President Aluki Kotierk.

She said prevention can happen simply by reminding people how important they are.

The Boost Your Community Summit also marked a move by Facebook, which co-hosted the summit, to integrate Health Canada’s national toll-free First Nations and Inuit Hope for Wellness Help Line into the social media platform’s own suicide prevention strategy and online wellness hub.

If you are in emotional distress, First Nations and Inuit Hope for Wellness Help Line can be reached at 1-855-242-3310. The line is free and available 24-hours a day. 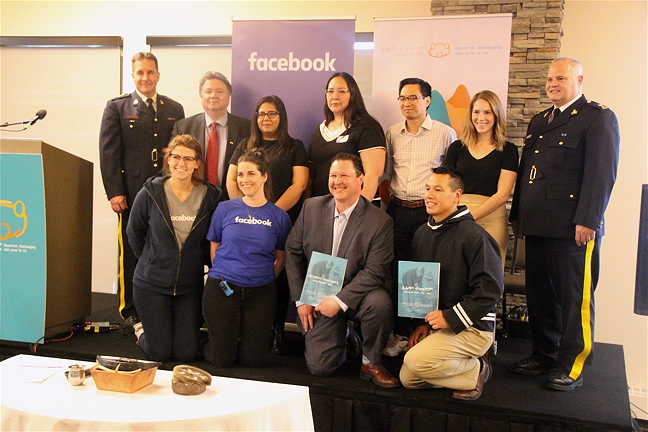 People representing the Government of Nunavut, Nunavut Tunngavik Inc., the Quality of Life Secretariat and the Embrace Life Council pose for a photo June 26 at the launch of a five-year suicide prevention action plan called Inuusivut Anninaqtuq, or United For Life.