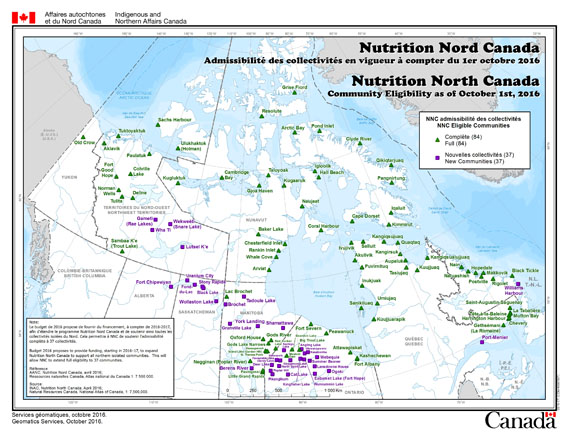 As of October 2016, Nutrition North Canada program cost more than $80 million a year and had spread its reach to 121 communities in three territories and five provinces.

The federal government is ready to report what people don’t like about its $80-million-a-year Nutrition North Canada program, but it’s not yet ready to say how they’ll change it.

The report makes no recommendations on how to improve Nutrition North Canada.

But it does contain a dizzying kaleidoscope of demands, complaints and suggestions, many of which flow from a cross-Canada community tour that ran from May 2016 to January 2017.

INAC set that tour in motion following an election campaign promise that the victorious Liberals made in 2015 to “reform” Nutrition North.

“We’ll work with northern communities to make sure the program is more transparent, more effective and more affordable to you,” Liberal leader Justin Trudeau bragged at a campaign event in Iqaluit on Oct. 10, 2015.

The Trudeau government in October 2016 added 37 more communities, most of them First Nations communities in the provinces, to the Nutrition North eligibility list and put an extra $13 million a year into the program’s budget to pay for it.

But the basic structure of NNC, in place since April 1, 2011, remains otherwise unchanged.

This past February, Carolyn Bennett, the minister of Indigenous and Northern Affairs, said in the Senate that the government faces “a difficult challenge” responding to food insecurity in the North.

And she also said the federal government is wrestling with the problem of whether Nutrition North is a social program that should be aimed at those most in need, or whether it’s a “fairness” program for northern workers who move up from the South.

The consultation report, organized for INAC by a firm called Interis, repeats many complaints that have circulated in the public domain for years, and which appear within separate online reports, posted months ago, that summarize what organizers heard at each of last year’s community meetings.

Some of those comments and complaints include:

• many requests that lard, butter, margarine, rice, pasta, coffee, tea and large juices be moved from the level 1 to the level 2 subsidy list;

• many requests that infant formula and baby food get an even higher subsidy;

• many requests that diapers, wipes, baby bottles and personal care items be eligible for the NNC subsidy;

• various requests for country food to be subsidized, including numerous ideas on how to do it;

• requests from a small number of people for all food, except junk food, to be subsidized;

• comments from many people who believe northern customers do not receive the full benefit of the Nutrition North subsidy;

• complaints that perishable food is often spoiled or wasted by the time it arrives at northern communities;

• suspicions that retailers are raising their prices prior to the application of the subsidy to increase profit;

• complaints that subsidized rates in some communities are lower than standard air freight rates, allowing the retailer to pocket the difference; and,

And though many people in the communities want more items to be subsidized, health workers said that on the contrary, many items should be removed from the subsidy list.

Those items that health workers deem too unhealthy to be eligible for subsidy include:

• everything except the most basic healthy items such as fruit, vegetables, meat and milk; and,

The report also said many people don’t have enough information, especially in making comparisons between Nutrition North Canada and the Food Mail program that it replaced in 2011.

“The lack of understanding of NNC and the many misconceptions when compared with the previous Food Mail Program were noted throughout the engagement,” the report said.

Those “general misconceptions” include:

• the belief that under Food Mail, people could buy food at the same prices people pay in the South.

And even “highly-engaged” and well-informed stakeholders revealed that they hold big misconceptions about Nutrition North.

After the program was expanded to 37 more communities, many of those “highly-engaged” people thought the new communities would dilute the program’s existing budget.

But in fact, the NNC budget was increased by about five per cent a year to pay for inclusion of the added communities.

“There was little knowledge of the year-over-year budgeting increase of five percent, which is also in place,” the report said.

And within the 37 communities that were added to NNC in October 2016, many knew nothing about the program.

“For the most part, community leadership as well as individuals within the newly eligible communities had very little to no awareness of the program or how it operated,” the report said.

As for how to improve Nutrition North, the federal government heard a big range of suggestions, ranging from minor tweaks to a complete restructuring of the program from the ground up.

Some suggestions were highly interventionist, such as from those who called for government-run northern food stores and the nationalization of northern airlines.

Others were more market-oriented, such as those who suggested the encouragement of more competition through increased help for smaller retailers and the removal of taxes and fees on airlines and marine transportation companies.

The NNC works by providing direct subsidies to retailers for food shipped by air cargo to 121 eligible communities located in three territories and five provinces.

Right now, the federal government likely spends more than $80 million a year on NNC, including about $3.4 million on staff salaries. The INAC department has yet to state when it will announce changes to the program.