“This will keep some of the money in the country” 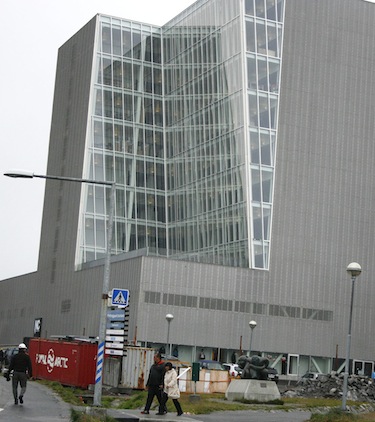 Some like it, others don’t: the Nuuk Centre shopping mall is an ultra-modern addition to the city’s skyline. (PHOTO BY DAVID MURPHY) 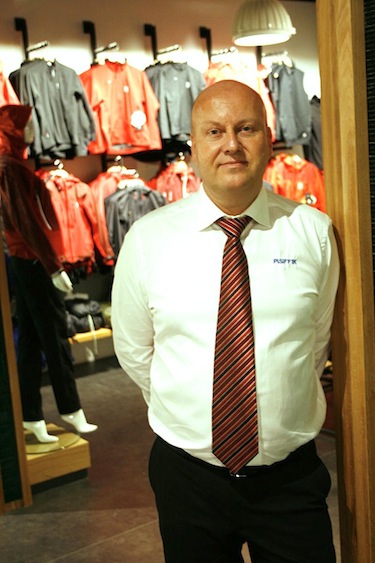 Per Steen Larsen, chief executive officer of Greenland’s largest privately owned company Pisiffik, thinks the mall is going to be a good for Greenland’s economy as less people will shop online during the cold winter months. (PHOTO BY DAVID MURPHY)

NUUK — Thousands of Nuuk residents flocked into the newest and most striking addition to the city’s ever-expanding skyline July 27 as the ribbon was cut at Greenland’s first-ever indoor shopping mall.

Throughout the weekend, local people and visitors converged on the new mall, constructed at an estimated cost of $100-million.

Its modern grey exterior is combined with a windowed skyscraper filled with office space for government administrators. That’s in addition to 25,000 square metres of commercial retail space at its base.

This is where hundreds of children swarmed polar bear mascots and ran backwards on sparkling new escalators during the shopping mall’s first weekend of operation, while others splurged at its 24 retail stores.

“I think about 99 per cent of people from Nuuk were here yesterday. Because it was history,” Per Steen Larsen, chief executive officer of the grocery store Pisiffik, the largest private company in Greenland, said July 28. The grocery store and three of his other retail shops cover roughly half of the shopping mall’s ground space.

He said the new shopping mall was a necessity, as his other smaller shops were just not cutting it at other venues. His new store is roughly half the size of a soccer field.

“The shop we had, the main store, we would fill it up in the morning, but it would be empty in the evening,” Larsen said.

“With this shop, it’s easier. Our biggest competition was much bigger than us [in Nuuk]. But not anymore,” he said with a smile.

That’s also the reason Mette Lynge, owner of Anori, an arts store filled with Inuit carvings, seal pelts, tourist items and clothing, decided the shopping mall was the next step for her business.

“I can see possibilities because our first shop — it’s very small. We have a lot of stuff. It’s very, very closed and compact. So I can see we can fend up here as well,” Lynge said.

She’s positive that profit margins will spike because of the move, too. Her other store will remain at the historic waterfront, but she likes the idea of people moving in and out of the new city hub.

“I know a lot of people will come here,” she said.

The ability to visit the shopping mall at all times of the year, where people can park underground and walk around without feeling the bitter cold, is a major plus for Greenland as a whole, said Larsen.

“It’s increasing the economy. I think so. A lot of people in Greenland use websites from all over the world [to order goods]. But I think this will keep some of the money in the country,” Larsen said.

Not everyone is so thrilled about the mall, however. Rebecca Faergegriaaid, an early childhood educator, questioned whether the change in the city’s dynamic would be a good thing,

“We have been talking about what will happen in the middle of the city. There’s a lot of shops that have been closed there, and moved here,” said Faergegriaaid. “What will happen there? Will there be any new stores? Or is it just going to die?”

She was also skeptical of the design of the building.

“The rest of Nuuk there were so many colours. But this is big and grey. But it’s modern I guess,” said Faergegriaaid.

Nuuk Centre now becomes the closest shopping mall to Iqaluit, only a two-hour flight away via Air Greenland, which is operating two weekly flights between Nuuk and Iqaluit this summer. 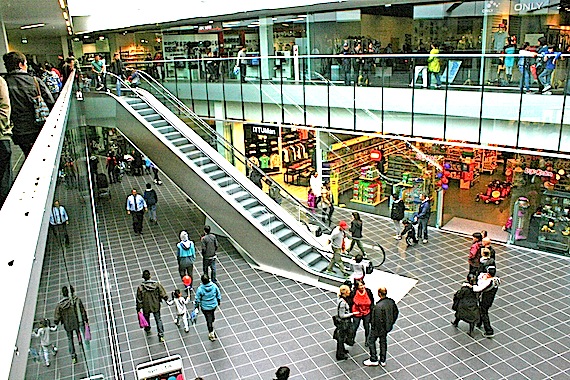 Shoppers can park their cars underground and then choose between 24 shops inside Nuuk’s new shopping mall. (PHOTO BY DAVID MURPHY)