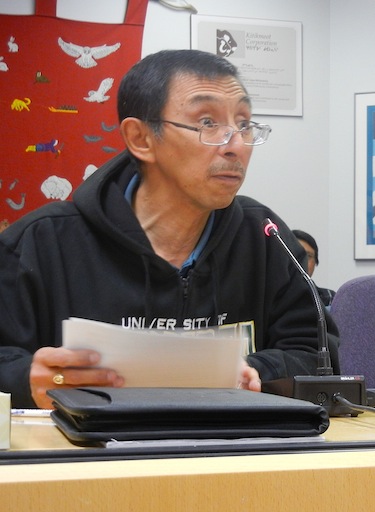 The Qulliq Energy Corp. once again has a chair and functioning board of directors, following the sudden resignation of former chair Simon Merkosak and five other directors earlier this month.

Paul Okalik, the minister responsible for the QEC, announced Jan. 22 that ex-GN bureaucrat David Omilgoitok of Cambridge Bay will serve as the next chair of the corporation, along with four new directors.

Omilgoitok, who now serves as president and chief executive officer of the Kitikmeot Corp., worked for many years as a senior manager with the Government of Nunavut, holding such high profile jobs as deputy minister of Executive and Intergovernmental Affairs and deputy minister of Human Resources.

He replaces Simon Merkosak of Pond Inlet, who fell on his sword this past Jan. 6 to protest the November firing of Peter Mackey from the QEC president’s job and a decision to cut back on a proposed hydroelectric project for Iqaluit.

“I look forward to working with minister Okalik and joining the newly appointed Qulliq Energy Board of Directors,” Omilgoitok said in a press release.

Omilgoitok served as a deputy minister in the EIA department under Okalik’s premiership. In 2008, he donated $1,000 to Okalik’s re-election campaign that year.

The other new QEC directors are:

• Joshua Arreak of Pond Inlet, who serves as acting regional supervisor for the Department of Justice in Pond Inlet;

• Elijah Evaluardjuk of Igloolik, a former mayor of Igloolik who operates Tujurmivik Hotel and Pizzeria and also serves on the boards of the Baffin Business Development Corp. and the Nunavut Business Credit Corp.;

• Julie-Anne Miller of Iqaluit, the operator of a home-based daycare who served six years as a chairperson of a regional Employment Insurance Board of Referees in Ontario and who for 13 years worked as an organizer for various MPs;

Omilgoitok and the other new board members will join George Hickes Sr., the only remaining member of the previous board, to form a six-member body.

Under the Qulliq Energy Corporation Act, the power utility’s board must comprise between six and 10 directors.