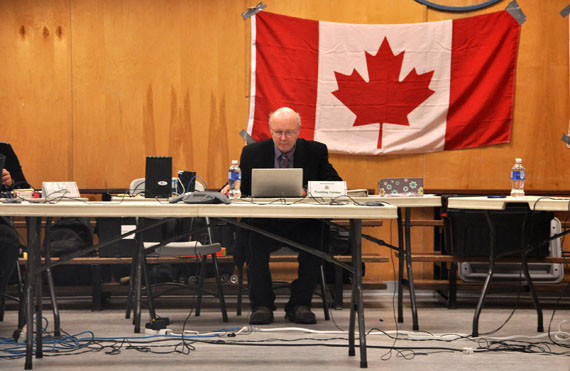 Garth Eggenburger is presiding over the coroner’s inquest into the April 2012 death of Baby Makibi Olayuk Akesuk. On Nov. 23, the six-member jury heard witnesses, including three former Cape Dorset nurses, testify that the on-call nurse on the night the baby died breached the GN protocol for dealing with infants in distress. (PHOTO BY THOMAS ROHNER)

If any of the three other nurses working at the Cape Dorset health centre had been on-call the night Baby Makibi Olayuk Akesuk had trouble breathing, the infant would have been treated in-person at the centre.

That’s what the jury of a coroner’s inquest into the three-month-old baby’s death heard from former Cape Dorset nurses who testified at the Kinngait Community Hall Nov. 22 and Nov. 23.

On April 4, 2012, on-call nurse Debbie McKeown told the baby’s mother, Neevee Akesuk, over the phone to bathe her baby at home and come to the centre in the morning.

Much of the testimony on the second day of the inquest, Nov. 23, focused on two GN policies that an independent review of the death, done by Yellowknife lawyer Katherine Peterson, said McKeown breached the night Baby Makibi died.

One policy says all infants must be “fully assessed in the clinic, whether it is during or after regularly scheduled hours.”

The other policy says all infants must be fully assessed in the clinic if the parent calls in with complaints.

“As soon as I’d hear what age they are, I’d say bring them on down [to the health centre],” Laura Easton, the off-duty nurse that night, said at the inquest.

Easton said she witnessed McKeown sign off on the two policies, as all Nunavut nurses must.

“I’d have to see the child… I’d much rather be wrong about a potential problem than be worried,” the third on-call nurse that night, Anke Krug-MacLean, said.

“Children under 90 days old have a very low tolerance for any type of infection.”

And the second on-call nurse, Teija Stenfores, testified that she would “automatically” have told the mother to bring the infant to the health centre so that she could assess him “right away.”

The GN called an inquest into the baby’s death this past February, hoping to prevent similar deaths in the future.

The purpose of an inquest is not to find fault but to find facts, presiding coroner Garth Eggenberger told the jurors Nov. 22.

The baby’s mother, Akesuk, testified earlier in the inquest that she had called the local health centre around 9 p.m. that April 4 and told McKeown her three-month-old baby wasn’t breathing normally, had been crying all day and might have a fever.

Eggenberger issued a summons in September, legally requiring McKeown to testify, but until Nov. 23 McKeown’s whereabouts could not be determined.

Her whereabouts are now known: A doctor from the Homewood Health Centre in Ontario, where McKeown is a patient, deemed the former nurse “not medically fit to testify,” the coroner’s lawyer Amy Groothuis told Eggenberger Nov. 23.

Barb Harvey, the director of professional practice for GN nurses, testified Nov. 23 that the policies McKeown broke are problematic, because they lack a time frame—they don’t say when the in-person assessments must be made.

Harvey said that’s why the GN is planning to roll out revised versions of those policies in 2017.

McKeown’s boss in 2012, Heather Hackney, asked Harvey to do a review of Baby Makibi’s medical treatment about five months after the infant’s death, including the treatment he received the night he died, the director said.

Hackney asked Harvey for the review because she worked in a different Nunavut region and could provide an arms-length review, said Harvey.

But Hackney, who currently works at the Igloolik health centre on restricted duties, did not tell the director about the numerous complaints already lodged against McKeown in 2012, Harvey said.

“Knowing more now, it should not have just been a chart review, it should’ve been a full investigation.”

That investigation, which included interviews with all of the nurses working at the Kinngait health centre the night Baby Makibi died, was finally ordered by Elise van Schaik in 2013, when van Schaik took over Hackney’s job, said Harvey.

In the investigation, Harvey said McKeown told her the case had already been reviewed by Hackney, that the baby’s father had placed the baby “face down” to sleep and that the mother was told to bring the baby in if he didn’t settle.

But those facts differ markedly from the testimony of the parents, Akesuk and Luutaaq Qaumagiaq, who said McKeown refused their request to come into the health centre to have their first-born baby assessed.

And McKeown, who Hackney promoted after Baby Makibi’s death, did not include any of the above facts in the baby’s medical records, Harvey testified.

The GN shut down Harvey’s investigation before it was complete, the director added.

And then, the government fired van Schaik.

Nurse Krug-MacLean told the jury that once Baby Makibi was brought into the health centre—his skin a grey-blue colour and cool to the touch—there was nothing that could have been done to save him.

“I remember Neevee inches away from my face, begging me to do something. I remember taking her face in my hands and saying, ‘there’s nothing I can do,’” she said.

Pathologists are expected to testify at the inquest Nov. 24 after their flights to Cape Dorset Nov. 23 were cancelled due to weather.