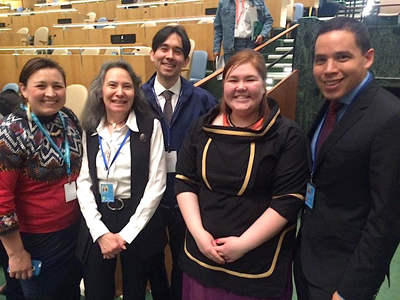 The Liberal government’s stated approach to the Inuit right to self-determination isn’t much of an improvement over that once offered by the Conservatives, Natan Obed, the president of Inuit Tapiriit Kanatami, said May 10 in a statement.

Obed made the remark in reaction to INAC Minister Carolyn Bennett’s speech at the United Nations May 9, when she announced Canada will fully support the UN Declaration on the Rights of Indigenous Peoples.

On May 10, Bennett confirmed that intention by formally removing Canada as a permanent objector to UNDRIP.

Obed said he welcomes Bennett’s statement as a sign of goodwill, but said Canada’s approach to Inuit rights is disappointing.

“[T]he statement disappointingly suggests little change from the previous government’s stance on the right of Inuit and other Indigenous peoples to self-determination,” the ITK release said.

That’s because ITK doesn’t like Bennett’s declaration that Canada’s approach to implementing UNDRIP will be based on rights already acknowledged within Section 35 of the constitution, which Bennett called “a box full of rights.”

“Unfortunately, these qualifying statements based on Canada’s interpretation about how the [UN] Declaration will be implemented are fundamental departures from the spirit and intent of the Declaration itself,” the ITK release said.

On that point, ITK said it wants more than what the federal government already acknowledges under Section 35.

“Section 35 is the legal floor upon which to build in more robust, consent-based processes between Indigenous peoples and the Government of Canada that are based on our right to free, prior and informed consent, which is a much stronger standard than ‘consultation,’ ITK said.

The idea that government actions may not proceed without the “free, prior and informed consent” of Indigenous peoples is enshrined in the UN declaration.

But the previous Conservative balked at that language, on the grounds that it gives Indigenous peoples a veto power over any development.

It was that reservation that Canada removed in Bennett’s announcement yesterday — but ITK appears to believe Ottawa is not giving sufficient weight to the idea of “free, prior and informed consent.”

To that end, Obed wants to do more work on the issue.

“I look forward to working with Indigenous representatives and the Government of Canada to move beyond the current unilateral positions stated today,” Obed said.

His comments stand in contract to the gushing praised that flowed May 10 from the Inuit Circumpolar Council-Canada.

“I want to thank the Canadian government, and also recognize Inuit leaders from Russia, Alaska, Greenland and Canada who drafted and negotiated, and challenged over all those years, and then lobbied their respective governments to ratify the Declaration,” Karetak-Lindell said.

Nunavut Premier Peter Taptuna adopted a similar tone in a statement issued May 10.

“This is an important step and I’m hopeful this will strengthen Canada’s relationship with all Indigenous people, including the Inuit of Nunavut. I look forward to working with the federal government in this important development to better our nation,” Taptuna said.