NDP would add $32 million over four years to NNC program 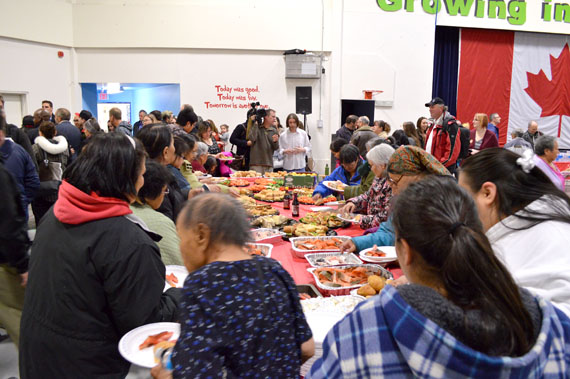 About 200 Iqaluit resident at a community feast held Sept. 29 by the New Democratic Party’s campaign in Nunavut. (PHOTO BY STEVE DUCHARME) 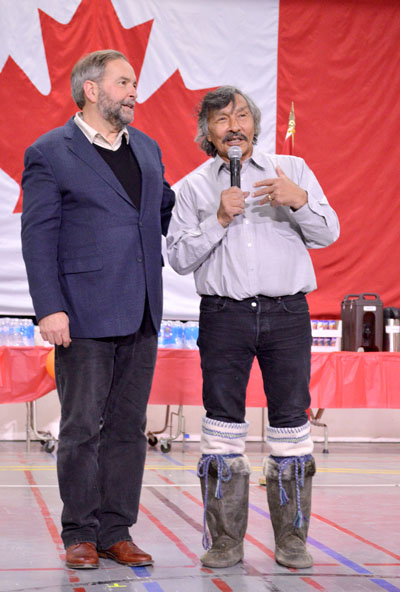 NDP leader Thomas Mulcair with Nunavut candidate Jack Anawak at a community feast held Sept. 29 in Iqaluit. “You deserve to have someone as dedicated and hardworking as Jack Anawak work for you and we will do everything to get him elected,” Mulcair said. (PHOTO BY STEVE DUCHARME)

“Stephen Harper has used northern communities as convenient photo-ops for years while failing to address the most basic concerns of families — access to affordable food,” Mulcair said in a statement circulated on his arrival to Nunavut’s capital.

If elected, Mulcair will introduce a $32 million expansion over four years to Nutrition North, and says he wants to bring the program to 50 remote communities not currently serviced by the plan.

“Let’s start with our elders, because they deserve to be taken care of — the price of food, the failure of the Nutrition North program means that a lot of our elders are simply are not able to eat decently,” he said during an NDP-hosted community feast at Nakasuk school on the evening of Sept. 29.

Mulcair’s visit drew a pre-emptive counterattack from incumbent Conservative MP Leona Aglukkaq, who reacted with a written statement distributed to the media.

“While you talk vaguely about food security issues in Nunavut, you and your NDP party voted against increased funding for Nutrition North Canada, voted to keep the long-gun registry that would affect Inuit hunters and your deputy leader criticized and vilified the Inuit traditional polar bear hunt,” she wrote.

Mulcair worked through a full schedule during his Sept. 29 visit, when he and candidate Jack Anawak rode on ATVs through Sylvia Grinnell Park Tuesday afternoon with tour guides from Arctic Kingdom.

Northmart was next on agenda, and though not open to the media, Mulcair reiterated his commitment to overhauling Nutrition North.

The day of campaigning ended with a community feast at Nakasuk school.

About 200 hungry Iqalungmiut —and a small platoon of national media reporters — heard speeches from Anawak and Mulcair promising an end to what the NDP politicians alleged is “lip service” from the Conservative government.

“Not so long ago, we were just numbers,” Anawak said while holding up his father’s E-number disc, which federal officials handed to Inuit in the 1950s and 1960s to register “Eskimos.”

“The bureaucrats didn’t want to learn how to pronounce our names, we were just numbers to them.”

Mulcair went on to promise that an NDP government would accommodate the regional needs of Canada’s indigenous communities, with unique policies developed on a nation-to-nation basis for Inuit, First Nations and Métis alike.

“We’ll be there with you, every step of the way. Not to decide for you but to listen and understand,” Mulcair said.

“When Jack explains that he holds up that little medallion that was his fathers when people were just a number, when I listen to that I know that our hearts are in the right place and we’re going to be able to get to these solutions together,” he said.

Mulcair ended his speech with a strong endorsement of Nunavut NDP candidate Anawak.

“You deserve to have someone as dedicated and hardworking as Jack Anawak work for you and we will do everything to get him elected, because I want him beside me, playing a key role, when we form government on Oct. 19,” said Mulcair.

He did not specify further what that role would be.

During the morning of Sept. 30, Mulcair promised to spend $100 million on wind, small-scale hydro-electric and other clean energy projects to replace diesel generation in 25 rural and remote communities.

He also promised to create an Office of the Parliamentary Science Officer to provide MPs with “factual, science-based analysis” of issues, and in doing so he slammed Stephen Harper’s Conservative government’s attempts “to muzzle scientists and to stop leading experts from sharing important scientific information.”

Anawak will have to do markedly better than the NDP’s last outing against incumbent MP Leona Aglukkaq in 2011, when candidate Jack Hicks finished in third place with 19 per cent of the vote in Nunavut.