One little bird near Arctic Bay tells a big story 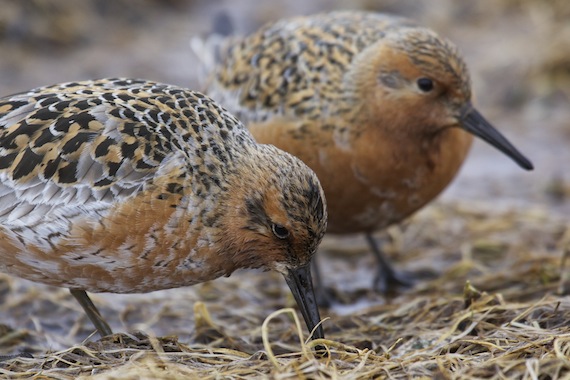 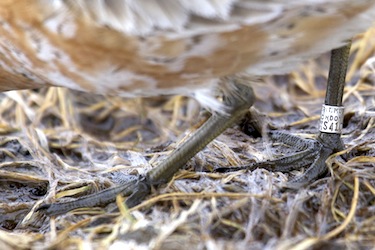 A close look at the Red Knot’s band (or ring, being as it is British). (PHOTO BY CLARE KINES) 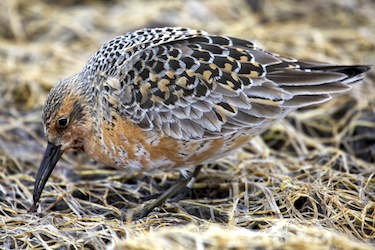 Red Knot XS41059 feeds while waiting for the snow to clear in its nesting area. (PHOTO BY CLARE KINES)

A robust little shorebird, with a bit of bling on its ankle is helping to shape our knowledge about birds that breed in the Arctic.

Willie, one of several avid photographers in Arctic Bay, took a number of photos of the red shorebirds that had just arrived on migration.

It was only after Willie looked at his photos back home that he noticed that one of them was sporting a bird band on its leg. And he managed to get a partial number from the band.

Red Knots are one of the most studied shorebirds in the world, in part because the North American race, Calidris canutus rufa, has shown a dramatic drop in their population.

Over the last 20 years their population has declined by more than 80 per cent.

As a result Red Knots are often banded, or given radio tags.

One of the most famous of these banded birds, B95, is more than 20 years old, and has a book written about him.

Red Knot subspecies log about 32,000 kilometres a year, from their breeding grounds in the High Arctic to the tip of South America where they winter.

But, as it turns out, the banded Red Knot found in Arctic Bay isn’t from the North American race of birds — and it’s not B95.

When that Red Knot’s band was more closely photographed, it held some surprise.

This little 120-gram bird sported a band from the London Museum of Natural history, XS41059, and it turns out it was banded in the Scottish Highlands in 2011.

Red Knots are circumpolar breeders, with each of the six races having distinct migrations.

And the European race, C. canutus islandica, winters in Great Britain and the coast of France, and breeds in Greenland and the extreme north of Nunavut, Devon Island, Ellesmere Island and the like.

North Baffin is not considered as part of these birds’ breeding grounds, but the conventional thinking may have to be altered.

And that comes as no surprise: much of what we know of bird populations in Nunavut is hampered by a lack of data.

Nunavut is a huge area, and while many people are keenly aware of the bird life around them, that knowledge isn’t being gathered. (You can contribute to knowledge of bird populations by entering bird sightings on eBird here)

Red Knot XS 41059 stuck around for a week, feeding and replenishing fat after its long migration flight. It likely delayed moving into its upland nesting areas due to a late snow cover here, but once that began disappearing so did the bird.

Likely XS 41059 is sitting on a clutch of eggs, waiting for a new generation to renew flight paths their ancestors have taken for tens of thousands of years.

The Red Knot and its travelling companions may not have covered quite the same distance as their North American cousins, it likely travels about half the distance, but its path is no less interesting.

It shares a Nunavut to Europe (and beyond) migration route with two other Arctic breeders, the Northern Wheatear and Common Ringed Plover (both of which continue down into Africa).

Perhaps, given the usual north-south view of bird migration, its route may be more fascinating. 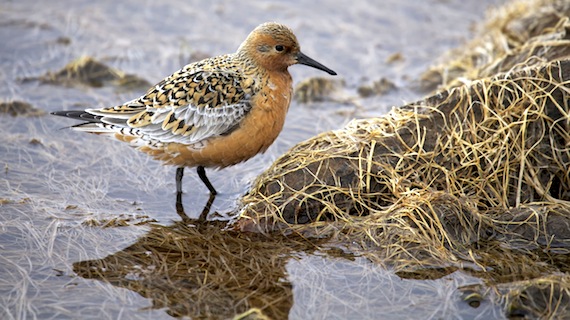