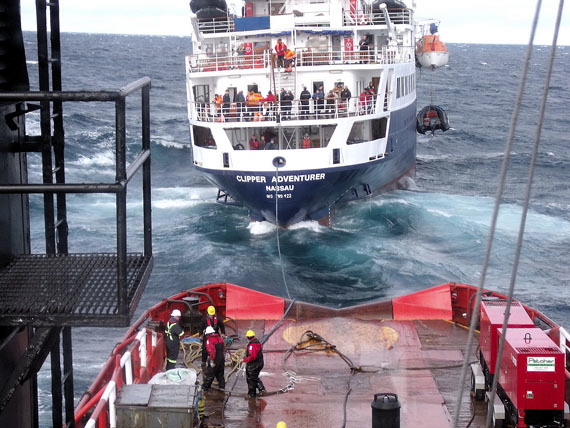 Although the Canadian Armed Forces carry out the heavy work in Operation Nanook, the central scenario for this year’s version of the annual Arctic exercise, Aug. 23 to 28, will be led by the Government of Nunavut’s tiny Emergency Management Organization.

The department’s staff of six handles all land-based emergency distress calls in the territory’s sprawling lands outside the 25 communities.

Very few of those distress calls ever involve cruise ships — but the territorial government expects to see many more ships, including larger ones, break the horizon in the coming years, says Ed Zebedee, director of protection services for Nunavut.

When they do, Zebedee’s department has to be ready for them. That’s why Operation Nanook 2014’s central scenario will revolve around a cruise ship that goes awry.

The scenario’s most intense activity is slated for the area of York Sound from Aug. 23 to Aug. 28, according to the GN.

The first to respond, and lead the emergency scenario, will be Nunavut’s Emergency Management Organization — a division of Protection Services in the Department of Community and Government Services.

EMO’s staff of six will be fully involved in command and control of operations for the week-long operation, both in Iqaluit and York Sound.

The simulation begins when a medium-sized cruise ship with 300 to 400 passengers runs into mechanical trouble in Frobisher Bay, and runs aground at York Sound.

Once the passengers are evacuated and come ashore, “they’re on our territory, so we’re responsible for them,” Zebedee said.

“We’ve got a number of injured and fatalities we have to deal with, and that overwhelms our capability,” he said of the scenario. “That’s where the military gets involved.”

EMO requests assistance from the military, who respond out of the Joint Rescue Coordination Centre in Trenton, Ontario.

Help will arrive with a Hercules aircraft which will transport Canadian Forces members and a “major air disaster aid kit” for survivors, Zebedee said.

Nunavut’s most recent real experience with a troubled ship came in 2010, when the Canadian-operated Clipper Adventurer ran aground with some 128 passengers on board. All had to be evacuated to nearby Kugluktuk.

That number of passengers pales in comparison to the 1,070 passengers — plus 665 crew — who will ply the Northwest Passage on board the massive Crystal Serenity in two years.

The 69,000-tonne, 13-deck luxury liner will cruise through Nunavut waters Aug. 16 to Sept. 17, 2016. The ship’s operator, Crystal Cruises, is ready for the voyage with an extensive emergency safety plan, which they have already shared with EMO.

“They’re been very good to work with,” Zebedee commented.

“It’s a very large ship,” he laughed — with more than 10 times the number of passengers and crew that more typical cruise liners travelling through Nunavut would hold.

Although Crystal Cruises has shared all its plans with Zebedee’s Protection Services division, the ship’s expected arrival is just one more reason the department has to ramp up readiness for bigger emergencies.

“There’s been a steady increase in ship traffic,” he told Nunatsiaq News.

Operation Nanook will allow EMO to test its specialized communications equipment for emergency response, and “allow us to find our gaps,” Zebedee said. “It allows us to look around and see what we might need, and how that equipment can be utilized in emergencies.”

The department will spend $30,000 to $40,000 on the exercise, much of it on a command accommodation tent to be set up at York Sound, Zebedee said.

The Canadian Armed Forces will cover the bulk of the operation’s expense. Operation Nanook as a whole, now in its eighth year, typically costs well over $10 million.

Leading up to the exercise, the GN’s Department of Community and Government Services is advising hunters and fishers who plan to be in the area of York Sound from Aug. 23 to Aug. 28 that they “will encounter ships, aircrafts and many military, government and emergency services personnel training on the land.”

“Some areas of York Sound may be inaccessible when the Operation Nanook is under way,” adds the advisory, released Aug. 7.

“All reasonable efforts will be made to ensure that hunting and fishing activities are not disturbed; however, individuals are encouraged to avoid these areas during this exercise, if possible.”

In Iqaluit, the scenario will involve a simulation at Qikiqtani General Hospital, where Nunavut’s Department of Health will exercise “casualty protocols,” Zebedee said.

Although the mock exercise involves 300 to 400 passengers and crew, only 50 individuals will stand in for the role of the crowd, he said.

Operation Nanook 2014 will also include a separate search and rescue scenario in Davis Strait, between Aug. 20 and 23, which will involve the Canadian Coast Guard and Royal Canadian Navy.

That earlier scenario involves a distressed fishing vessel. Unlike the second scenario, EMO won’t be involved in the three-day exercise because it will not occur on territorial land.