Open letter to foreign observers on the Greenland independence debate 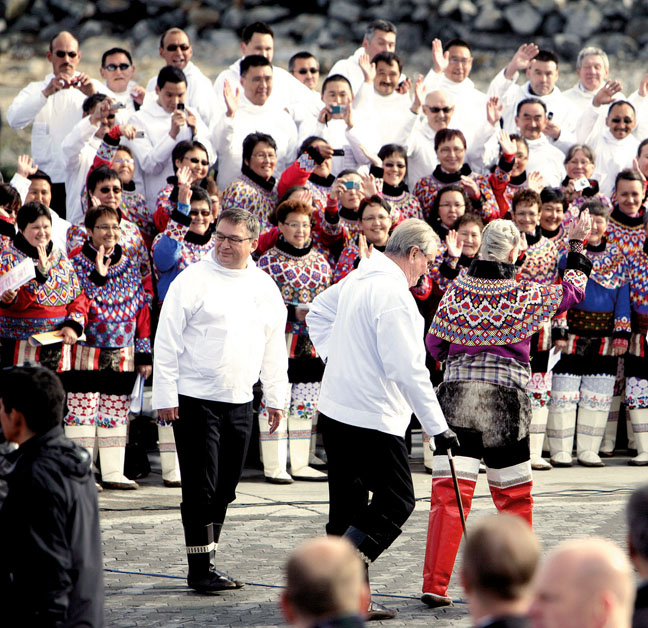 The prime minister of Denmark, Lars Løkke Rasmussen, Thor Pedersen, Speaker of the Danish Parliament, and Kuupik Kleist, who then served as Greenland’s prime minister, are seen at a celebration in Nuuk held June 21, 2009, for what was then Greenland’s new self-governance law. The island country still seeks full independence from Denmark. (FILE PHOTO)

Interest in Greenland on the part of foreign observers and commentators has been on the rise in recent years.

This makes us in Greenland very happy. It is always good to hear what other people think about current events in our country.

However, if one would like to make a statement about what we politicians in Greenland are working on, it may be a good idea to consult someone who actually takes in what we are discussing in our daily debates.

For those who can follow the debate, it is clear that there is no discrepancy between our efforts with regard to social, educational, economic and business fields, and the country’s overall future as an independent agent in a global world.

Our entire objective for a future in which we are independent people in our own country is in no way opposed to all the other political efforts we are conducting.

On the contrary, this objective is a prerequisite. This is because the vision of independence is the fuel that makes us all fight for a new and different society: a society made by ourselves, and that we make decisions over; a society where our constitution was written by us in our own language; a society we finance ourselves, and that our citizens are proud of; a society that shows its own flag to the world.

Therefore, it is sad to see that people without knowledge of the actual reality of Greenland have succeeded in contributing to the impression that we politicians in Greenland spend far too much of our time discussing independence, and that our country’s people get barely any attention in a number of other key areas.

If the same people could be kind enough to take a look at our financial legislation or keep up with the daily negotiations in our parliament, Inatsisartut, they would quickly recognize that both the energy and the funds spent on independence, compared to all other areas of Greenlandic society, are in fact minimal.

Unfortunately, this kind of distortion regarding Greenlandic discourse seems to have afflicted the Canadian ambassador to Denmark as well.

She has looked at Nunavut and Greenland and has been quoted as saying that we in Greenland, compared to Nunavut, “spend more time discussing independence than other popular issues.” (KNR, June 27) This has been presented in both Danish and Greenlandic press as if she believes we prioritize efforts towards independence too highly.

She has now countered this. She has explained that what she meant was that she does not know how highly independence is prioritized by Greenlanders compared with other daily priorities.

This is a completely different meaning than what the press in Denmark and KNR have attributed to her, and with this contribution, I would like to help with this situation, so that others will not need to experience the same lack of knowledge regarding our priorities.

Our goal in Greenland will not have been reached until the Greenlandic public is fully in charge of our own place, and as such, independence will always have a high priority.

That said, this is not a priority that impedes our daily efforts for our country’s citizens and their well-being.

What we seek to achieve with independence is a final liberation from the unequal relationship formed between us and Denmark over the centuries. It is an economic and political dependency that continues to reduce us to a vassal of a distant state, which furthermore governs large swaths of our political room to manoeuvre, and thus ultimately stands in the way of our complete self-governance.

But our wish for independence has never been born of a desire to exclude anyone. Quite the opposite, it is a desire to be able to meet with other countries on equal terms.

An independent Greenland will make us stronger both as a society and as individuals. Independence makes people more decisive and responsible with regard to their own lives and the future of their country.

This will furthermore only improve opportunities for strong, continued cooperation with those we are already closely connected to.

For that reason, we will naturally also take part in debating our future as an independent nation. When we discuss Greenlandic independence as the ultimate goal, we are describing the mission of six out of the seven parties we have in this country.

The only question is how we reach that goal.

In that regard, one would have to be blind and deaf to fail to understand that constant improvement on all areas in contemporary Greenlandic social, educational and commercial levels are simply a condition of our impending independence.

This is why we politicians in Greenland spend the vast majority of our time on improving in these particular areas.

Yet it is the dream of freedom that gives us our energy. Because it is only those who dare to dream who can bring change.