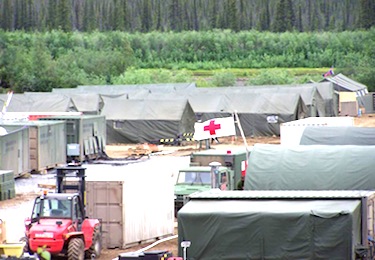 This is how the relocatable temporary camp for Operation Nanook 2012 in Inuvik looked on July 25. (PHOTO COURTESY OF JOINT TASK FORCE NORTH)

Now in its sixth year, Operation Nanook will run from Aug. 1 to Aug. 26 and involve more than 1,250 members of the Canadian Forces.

“This year marks the largest participation of Canadian Forces personnel in the operation’s history,” said Peter MacKay, the national defence minister, in an Aug. 2 news release.

“I am very proud of the work we continue to accomplish, in line with our Northern Strategy and the Canada First Defence Strategy, to effectively watch over Canadian territory, and to increase our ability to respond in the North alongside our many northern partners.”

This year’s operation will be conducted in two locations: in the Western Arctic, in and around Inuvik and Tsiigehtchic, Northwest Territories, and in the Eastern Arctic in the Hudson Strait and Hudson Bay.

The western scenario will include the building of two temporary bases of operations, will feature close collaboration between local and federal officials, and will see the Canadian Forces in the air and on land, the news release said.

The eastern scenario will focus on the approach of “a vessel of interest.”

Both scenarios will underline the role played by the Canadian Forces “in safeguarding the nation, deterring threats to our security, and responding to emergencies in the High North,” said the news release.

“The Canadian Forces remain ready and capable to operate in the North to protect Canadian safety and security,” said General Walt Natynczyk, Chief of the Defence staff. “Our ongoing defence activities will include enhancing situational awareness, demonstrating capacity to respond quickly and sustain the response anywhere in the High North, and maintaining a visible presence in support of the exercise of northern sovereignty.”

Canadian Forces personnel will work alongside the Canadian Coast Guard, the Royal Canadian Mounted Police, and Public Safety Canada, representatives from the Government of the Northwest Territories and the Government of Nunavut, as well as local officials from Tsiigehtchic, Inuvik and Churchill.

In its inaugural year in 2007, Operation Nanook was held over 10 days and included the participation of over 700 Canadian Forces personnel.

Last year’s Operation Nanook in Resolute Bay was suspended after the crash of First Air flight 6560 as it approached the Resolute Bay airport on Aug. 20.