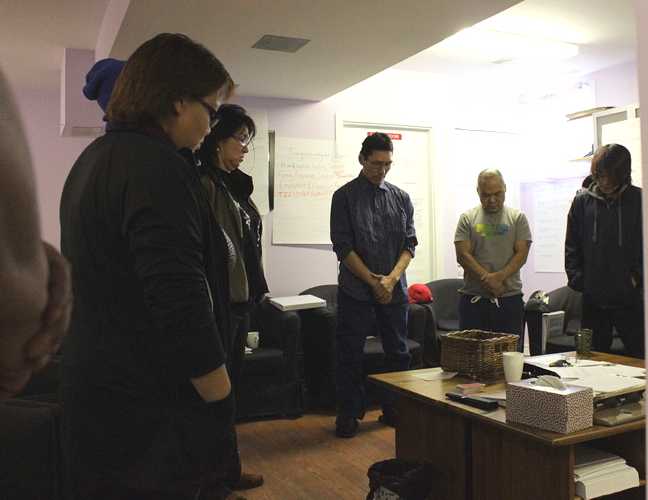 Mamisarvik Healing Centre clients pause for a prayer before a group therapy session in 2013. (FILE PHOTO)

OTTAWA—After almost shutting down in March, the Mamisarvik Healing Centre in Ottawa, which delivers a residential trauma and addictions program for Inuit, welcomed new clients again this week and those clients have at least one thing in common: they are all women.

Jason LeBlanc, executive director of Tungasuvvingat Inuit, which runs Mamisarvik, said Oct. 20 the decision to offer gender-specific treatment was based on current best practices in the field.

Mamisarvik chose to start with a women’s program, in part, to address issues raised by the Missing and Murdered Indigenous Women Inquiry and challenges of family instability and dysfunction raised in the Truth and Reconciliation Commission’s final report.

“There’s a lot of visibility around the plight of our women,” LeBlanc said.

“We really hoped that by starting with women, we would be in a place to have a greater impact on family units—helping moms retain or regain access to children, reunifying families and looking at that kind of peripheral outcome of reducing the number of Inuit kids in care.”

This week, Mamisarvik began a staggered intake of 12 women who will participate in the same eight-week treatment cycle offered by the centre in the past.

Mamisarvik then plans to offer another women-specific cycle before switching to a program tailored for Inuit men.

Mamisarvik is a 12-bed adult treatment facility on Russell Road in Ottawa. Launched in 2003 with Aboriginal Healing Foundation money, the centre was forced to cobble together other funding sources when the AHF fund ran out in 2013.

In early 2016, TI announced it would have to close because it had run out of funding options, but days before the planned closure, Ottawa kicked in $1.3 million to keep the centre afloat for another year.

The federal government gave no guarantee that the money would continue beyond March 2017.

So this summer, TI formed a committee of former staff and outside experts to reflect on past experiences, research best practices—which called for gender-specific programs—and try to figure out a long-term money solution for Canada’s largest and most comprehensive Inuit-specific treatment program.

“We want to rebuild things in a more sustainable way,” LeBlanc said. “We don’t want to start this up just to stop it again.”

He’s hoping programming and other changes will help position Mamisarvik as the go-to Inuit-specific treatment provider capable of delivering the kinds of solutions described in many of the Truth and Reconciliation Commission report’s calls to action which specify the need for culturally-sensitive, Indigenous healing programs.

But because TI is based in Ontario and serves Indigenous clients, Mamisarvik is also hoping to appeal to the Ontario government for support.

In the past, LeBlanc said, Mamisarvik’s clientele mostly came from the Government of Nunavut or Corrections Canada referrals.

That meant marginalizing Inuit in Ottawa, the largest population of Inuit outside of Inuit Nunangat and TI’s hometown base, LeBlanc said.

In May, Ontario’s premier, Kathleen Wynne, pledged $250 million toward TRC-related healing and reconciliation programs and LeBlanc thinks Mamisarvik can find a way to tap into that.

“We have a solution, we just have to connect some of the dots and the political will to invest in TI and our ability to meet those needs,” LeBlanc said.

“We are absolutely remaining committed to being open and helping Inuit, period—not just exclusively Ontario. But one of the key things we learned in the last couple of years is that if our funding model is exclusively dependent on external jurisdictions, it’s very fragile.”

LeBlanc said TI has had productive conversations with Ontario’s health department as well as potential federal funders and other agencies, to secure necessary core funding for Mamisarvik.

And if TI is successful, Mamisarvik will introduce new four-to-six month treatment programs for men and women to accommodate individual client plans and allow people to learn, grow and get healthy at their own pace—flexibility currently lacking under the 53-day program.

All levels of government have identified the need for services that Aboriginal address trauma, addiction, violence and suicide and which do so in ways which incorporate culture and language, LeBlanc said.

“This is really the time when we are trying to work with partners at the federal, provincial, municipal level, and within our own Inuit government structures, to say, ‘Here’s the solution to what we’re all identifying as an on-going challenges. So let’s invest in it together to ensure it’s here for the long haul,’” he said.

“TI is a not-for-profit charity. We’re an Inuit organization and we’re not in a position to subsidize services and responsibilities of governments.”