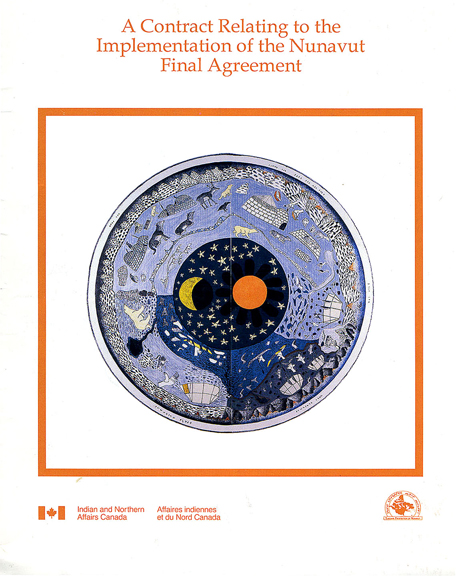 The cover of the last valid implementation contract for the Nunavut Land Claims Agreement, which expired in 2003. A new one, covering the period from 2013 to 2023, will include big funding hikes for IPGs like the Nunavut Impact Review Board and the Nunavut Water Board. (FILE PHOTO)

As is often the case with big announcements out of Ottawa, the Government of Canada issued a news release at the end of the day March 20, touting big funding hikes for the family of Nunavut boards and commissions known as “Institutions of Public Government,” or IPGs.

In their big lawsuit filed in December 2006, Nunavut Tunngavik Inc. alleged the federal government was underfunding these agencies and therefore breaching its obligations under the Nunavut Land Claims Agreement.

The new funding levels announced March 20 will form part of a new implementation contract for the NLCA that will cover the period from 2013 to 2023.

The last implementation contract, negotiated in 1993, expired in 2003 and was never renewed.

It only took 12 years for talks to get started on a new one. NTI’s 2006 lawsuit was meant, in part, to force Ottawa to negotiate a new contract and properly fund those institutions of public government.

Ottawa and the land claim organization reached a tentative agreement in that dispute on March 9.

Ottawa, NTI and the Government of Nunavut agreed not to disclose details of that settlement until they all had time to approve all components of the deal.

The March 20 news release, sent out by Ted Laking, Nunavut MP Leona Aglukkaq’s director of communications, said Ottawa is about to increase budgets for the following bodies according to these percentages:

• Nunavut Impact Review Board: 55 per cent;

• Nunavut Wildlife Management Board: 13 per cent; and,

“The funding increases will create greater opportunity for resource development by maintaining a strong regulatory regime in Nunavut,” the news release bragged.

The money is part of Canada’s commitment toward renewing the implementation contract of the NCLA, the release added.