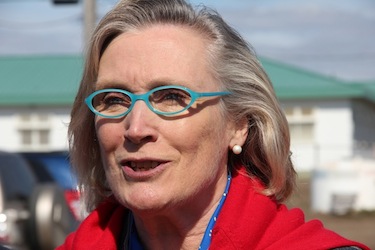 Carolyn Bennett, then an opposition MP, speaking in Iqaluit June 27, 2015 outside of the Unikkaarvik Visitor’s Centre in Iqaluit, where she criticized the federal government’s Nutrition North Canada program, saying that 80 per cent of children shouldn’t be going to school hungry. As minister of Indigenous and Northern Affairs, Bennett and Health Minister Jane Philpott are now responsible for fixing NNC. (FILE PHOTO)

The Trudeau government has finally announced its long-anticipated consultation tour of up to 20 northern and mid-northern communities, aimed at finding ways of improving the much-reviled Nutrition North Canada food subsidy program.

Carolyn Bennett, the federal minister of Indigenous and Northern Affairs, actually held the first consultation herself this past Jan. 9, during a visit to Norman Wells, Northwest Territories.

But the Trudeau government’s promised consultation tour didn’t start up again until May 30, at a meeting held between 7 p.m. and 9 p.m. at the community centre in Old Crow, Yukon.

That coincided with a public meeting of the Nutrition North Canada Advisory Board.

The former chair of the Inuvaluit Regional Council, Nellie Cournoyea, a Conservative appointee, still serves as interim chair of the advisory board.

On June 1, federal officials will hold an NNC consultation at the community hall in Ulukhaktok in the Northwest Territories, before heading to the eastern Arctic next week.

During the week of June 6, they’ll hold consultations at the Qaggiq gymnasium in Kangiqsujuaq and at the recreatioin centre in Inukjuak, though they do not give specific dates.

On the following week, they’ll move on to the Nunatsiavut communities of Rigolet and Hopedale.

Later on, at dates and venues still to be announced, they’ll hold consultations in Baker Lake, Kugaaruk, Iqaluit and Pond Inlet.

After their four-community swing through Nunavut, they’ll move on to northern Ontario, Manitoba and Saskatchewan, where they will hold consultations in Fort Albany, Big Trout Lake, Oxford House, St. Theresa’s Point and Fond-du-Lac, at dates and venues still to be announced.

After that, they’ll visit Lutsel K’e, NWT, and other communities.

Bennett and Jane Philpott, the federal health minister, are in charge of the consultation processs.

“Northerners need to have a direct voice in the Nutrition North Canada program. I encourage Northerners to participate at the upcoming sessions to have their say and to contribute ideas about how to make the program work better for them,” Bennett said in a news release.

Prior to the last federal election, the Conservative government of Prime Minister Stephen Harper was spending up to $66 million a year on Nutrition North Canada.

In its March 2016 budget, the Liberals promise to spend $64.5 million more on NNC over five years, starting in 2016-2017, and $13.8 million a year to expand the program to more northern communities, especially First Nations communities in the provinces who are not eligible under the existing program.

Before revising the program, the federal government said it will consult the following groups:

• experts involved in areas such as food security, northern transportation and northern infrastructure.