Ottawa botanists back on the land in western Nunavut

“Being in the field, that’s where we get our primary information for understanding biodiversity” 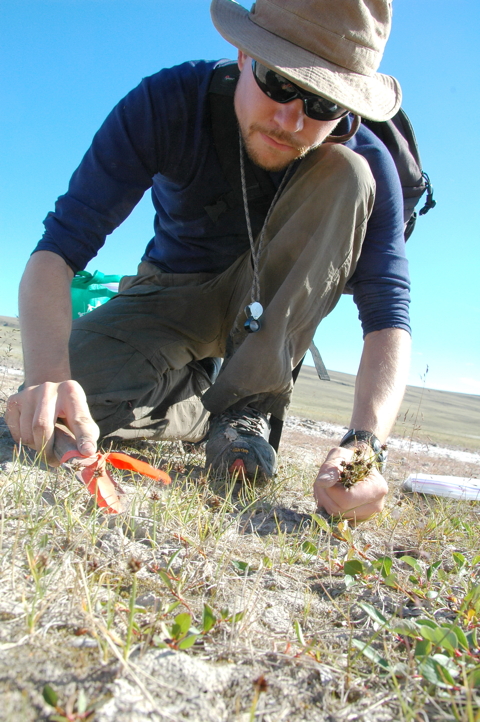 Canadian Museum of Nature botanist Jeff Saarela collects plant specimens during a 2012 expedition down the Soper River. He and his colleagues are making collections near the Coppermine River this summer as part of a multi-year Arctic Flora project. (PHOTO BY ROGER BULL)

It’s backbreaking work and the mosquitoes might drive them all batty, but a team of botanists have returned to Nunavut this summer to collect plants for a snapshot of what’s growing here, and how that might soon change.

Dr. Jeff Saarela from the Canadian Museum of Nature in Ottawa, along with colleagues Paul Sokoloff and Roger Bull, are currently collecting specimens about 50 kms south of Kugluktuk near the Coppermine River.

“Being in the field, that’s where we get our primary information for understanding biodiversity,” said Saarela.

“Being out in nature, making those collections and exploring, it’s fundamental. And that kind of work doesn’t happen as much as it used to, at a time when we need more of it because things are changing due to climate impacts, human impacts — all kinds of stuff, not just climate change.”

Saarela and his team took a trip down the Soper River two years ago as part of a multi-year Arctic Flora of Canada and Alaska project.

A flora is an inventory of plant species growing in a specific location and Saarela is particularly interested in the Arctic because there are many areas where no specimens have ever been collected and knowledge gaps are wide.

It’s the team’s intention to grab a point-in-time snapshot of what’s growing across Arctic North America over the next few years so scientists in future can gauge how the fluctuating climate and other factors are impacting what types of plants grow here and how they grow.

Without that baseline data, it would be impossible to know if and how the tundra is evolving under warmer skies and longer summers.

For the 2012 Soper trip, the team rented inflatable boats to travel down the river and camp at different collection spots but for this summer’s month-long Kitikmeot trip, they have hired helicopters and ATV drivers to take them to different camps along the Coppermine River.

The area was chosen because it is a transition zone between where the tree line trickles away to tundra. Such transition zones are rich for exploration, Saarela said, because they show the northern reaches of the boreal forest and the southern limits of the Arctic tundra.

“I’ve wanted to get into an area right at the boreal tundra transition zone,” he said. “It’s an abrupt transition, I believe, but it hasn’t been studied from the perspective of plant biodiversity so it’s at those interfaces between different ecological communities that you often find the most species diversity.”

They arrived at their first camp June 30, about 50 km south of Kugluktuk.

According to Twitter updates from @jmsaarela, the weather was hovering around 20 C earlier in the week but it was about 5 C today and expecting to climb again into the teens next week.

The team brought along an inflatable raft which they plan to use to cross the river at certain spots.

After seven days at their current location, the helicopter will return to take them to more remote areas unreachable by foot. Then they will go to their second camp about 15 kms southwest of Kugluktuk to collect specimens at Kugluk/Bloody Falls Territorial Park.

“The flora has not been surveyed comprehensively there. There’s very little in fact,” Saarela said, “so what we find will be of great interest to the park for their management programs and educational programs.”

They are also hoping some summer students working at the park will join their expedition to learn how to collect plant specimens but also to teach the scientists what they know of the tundra environment on which they grew up.

After that, the team has arranged for a boat pick-up to take them to Kugluktuk where they will camp for about a week and collect species within walking distance of the town site.

If possible, they hope to hire boats and all-terrain vehicles to take them further afield.

While out exploring, they plan to look for a campsite near Sandstone Rapids occupied by the Canadian Arctic Expedition 100 years ago where early explorers collected a few twigs which were poking up through the snow.

There likely won’t be any remnants or artifacts there but team members might be able to recognize the location from historic photographs.

“There’s a photograph on our blog of a distinctive cluster of spruce trees behind one of their tents so we may be able to locate the exact site of that camp,” Saarela said.

While camping near Kugluktuk, Saarela and his colleagues plan to make a public presentation in town to explain to local residents what they’re doing, some of the interesting things they’ve found, and hopefully gain local knowledge from the people who attend.

“I think we may learn as much from them as they learn from us,” he said. “I hope it’s a good two-way interaction.”

You can follow Saarela and his team on Twitter at @jmsaarela and #naturescience. You can also follow their journey on the land as it progresses here. 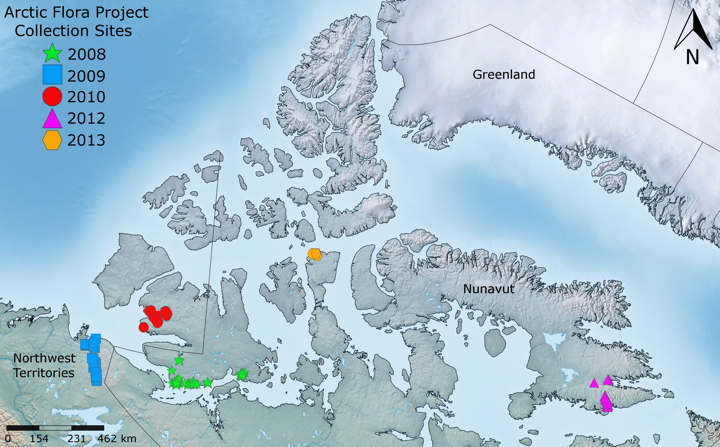 This map shows areas where plant collections have taken place so far for the Arctic Flora project. (COURTESY THE CANADIAN MUSEUM OF NATURE)