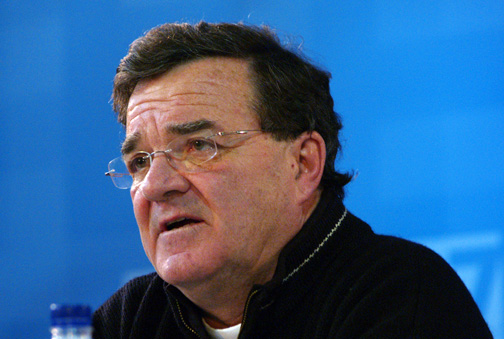 Jim Flaherty, the federal finance minister, on a visit to Iqaluit in 2010. His 2014-15 budget, unveiled Feb. 11, will hike taxes on tobacco and put more money into Nutrition North Canada and into rural and remote broadband internet. (FILE PHOTO)

Cigarette smokers, who comprise roughly 60 per cent of Nunavut’s population, will pay about 50 cents more for a pack of 25 and $4 more for a carton of 200.

That’s the first increase in the federal excise tax on tobacco since 2002. Through it, Ottawa expects to rake in an additional $685 million in 2014-15 and $660 million more the following year.

The RCMP will get $91.7 million over the next five years to go after tobacco smugglers using high-tech sensing devices along the U.S.-Canada border.

At the same time, Ottawa will renew the expiring Industry Canada subsidy scheme used to prop up broadband internet services in Nunavut, Nunavik and other rural and remote regions.

Flaherty said his government will spend $305 million over five years on northern and rural broadband — an apparent renewal of a subsidy suite that was set to expire by 2016, threatening to produce astronomical increases in retail internet rates for numerous remote communities.

A Finance Canada budget document released Feb. 11 said Ottawa will use the $305 million to provide 280,000 households with a target speed of five megabits per second.

The federal government provided few details about the program, but said they will announce more information later.

The SSI Group, which offers internet to Nunavut and Northwest Territories customers through the Qiniq and Airware brands, lavished praise on the government only an hour after Flaherty’s announcement.

“This will allow for better and more affordable broadband,” SSI boss Jeff Phillips said in a news release.

Right now, the program contributes about $60 million a year to subsidize the cost of transporting perishable nutritious food to 103 northern communities.

“Economic Action Plan 2014 commits to enhance funding for the program to help improve access to healthy food in these communities. Details will be announced in the coming months,” a Finance Canada document said.

Other spending measures include:

• $70 million over three years on a special health services fund for the three territories, aimed at improving access to health care;

• a one-year renewal of the 15 per cent flow-through tax credit for people who buy shares in junior mining exploration companies.

Anyone hoping for any federal help in the development of a port at Iqaluit or better docking facilities in other communities will be disappointed.

Flaherty’s budget promises $40 million for small craft harbours, but only for the repair and maintenance of existing facilities.

Another $33 million spending item, for regional and local ports, is aimed only at helping the federal government sell off more of the existing ports that Transport Canada still operates.

There’s also no housing relief for Nunavik, where the Makivik Corp. has long demanded a big catch-up social housing contribution from Ottawa.

“This government’s sustained focus on the North, as reflected in this budget, is both welcome and positive,” Audla said.

ITK also said they’re happy about the renewal of the SINED program.