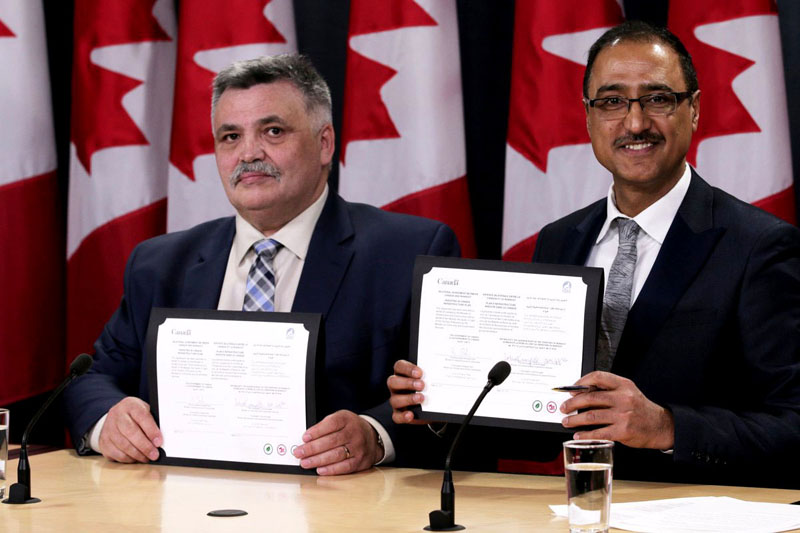 Lorne Kusugak, Nunavut’s minister of community and government services, and Amarjeet Sohi, the federal minister of infrastructure and communities, in Ottawa yesterday. The federal government posted this photo on Twitter to brag about the signing of an Investing in Canada infrastructure agreement between Canada and Nunavut on Wednesday, March 28, worth about $56.6 million a year. (GOVERNMENT OF CANADA/TWITTER)

Though it’s old news now, Lorne Kusugak, Nunavut’s minister of community and government services, and Amarjeet Sohi, the federal minister of infrastructure and communities, signed a $566-million agreement in Ottawa yesterday that will give Nunavut about $56.6 million a year between now and 2028.

Kusugak told Nunavut MLAs about the $566-million agreement this past March 7, when presenting his department’s 2018-19 capital budget.

At the time, Kusugak said to qualify for that money, Nunavut must kick in a minimum of $188.7 million of its own money, saying that amount “represents a significant draw on the GN’s capital resources.”

That’s because the participating territory or province must put up 25 per cent of the cost of projects while the federal government contributes 75 per cent.

The money, which flows through three streams, will go towards various projects throughout Nunavut’s three regions and 25 communities.

But Nunavut does not yet have a list of specific community projects, though Kusugak said yesterday that his department is now consulting on that with municipalities and others.

The money comes from Ottawa’s Investing in Canada infrastructure scheme, which aims to deliver about $180 billion in capital funds to municipal, provincial and territorial governments across the country between 2016 and 2028.

The Government of the Northwest Territories signed its version of the agreement, worth about $570 million, this past March 7, and Sohi wants to get all territories and provinces signed up by the end of the month.

The three streams of cash, to be paid out to Nunavut between now and 2028, are:

• Community, Culture and Recreation Infrastructure: $26 million, for projects aimed at culture and recreation.