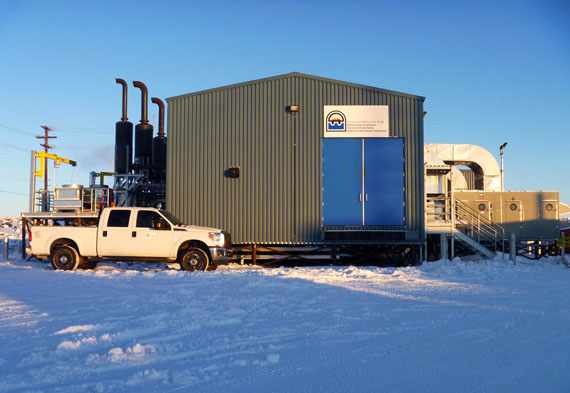 The power plant in Taloyoak, which opened in 2016. The Qulliq Energy Corp.’s power plants will be exempted from paying the carbon tax for any diesel they burn to generate electricity, the federal government has announced. (PHOTO BY LARRY QILLUNIQ/QEC)

The Qulliq Energy Corp. won’t pay more next year for the diesel it burns to generate electricity, after the Trudeau government’s carbon tax kicks in, the federal Department of Finance confirmed yesterday.

That’s because any diesel the QEC uses at its power plants will be taxed at a rate of zero cents per litre.

“The approach to pricing pollution in the territories takes into account their unique circumstances, including high costs of living and of energy, challenges with food security, and emerging economies,” the Department of Environment and Climate Change said on its website.

And as promised last June, any airline operating a route inside Nunavut will be exempt from paying more for either aviation gasoline or aviation turbo-fuel.

Though they’ll be required to report how much fuel they consume, airlines flying inside Nunavut will also be taxed zero cents per litre.

But there’s a catch. That aviation fuel exemption applies only to “intra-jurisdictional” flights—but not to flights between two different provinces or territories.

“This ensures that, while carbon pollution pricing applies broadly in Canada, it also reflects the high reliance on air transportation in the territories,” the federal finance department said.

The same arrangement will be used in Yukon. And for all three territories, a carbon tax regime will start in July next year.

The Trudeau government now refers to the tax as “pollution pricing.”

Until recently, the Government of Nunavut had opposed the imposition of a carbon tax, fearing its potential impact on the territory’s high cost of living and fragile economy.

But last May, David Akeeagok, who then served as Nunavut’s finance minister, announced that the GN had worked out a deal with Ottawa under which the federal government would impose a carbon tax but give all the revenue to the GN.

Under that arrangement, Nunavut could receive $15 million in additional revenue during the 2019-20 fiscal year.

“Canada will bear all costs of administering and enforcing their tax, but has committed to sharing 100 per cent of the revenues with us,” Akeeagok said.

The GN will likely announce what it plans to do with the extra money in its 2019–20 budget.

Despite the exemptions for aviation fuels and diesel used at power plants, other fuels will be taxed in Nunavut, starting next year.

These carbon levies are based on an overall carbon levy of $20 per tonne starting next year, rising to $50 per tonne by 2022.