Nunavut, Nunavik designers “proud” to see creations on the runway 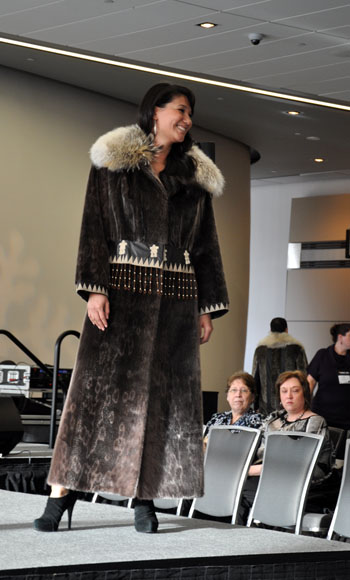 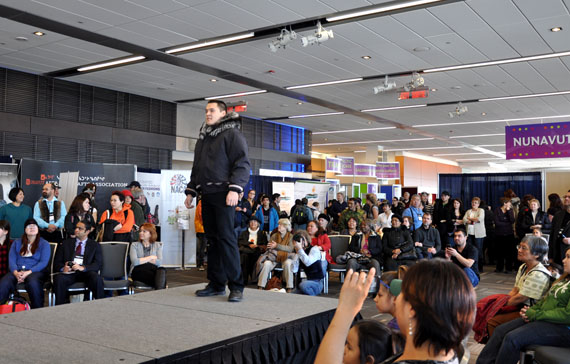 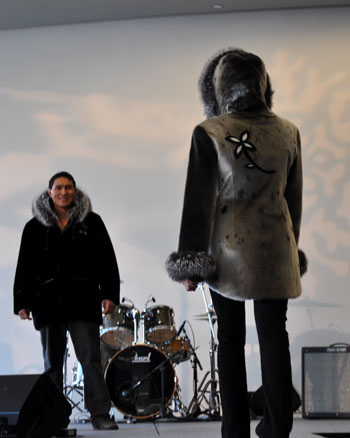 This seal skin coat features floral detail along its back. (PHOTO BY SARAH ROGERS)

No one can accuse Inuit of being an unfashionable people.

Especially following the 2012 Northern Lights business and cultural showcase hosted Feb. 1-4, where veteran designers and up-and-comers alike got a chance to show their creations to an Ottawa crowd.

Every afternoon during the four-day event, crowds would fill the upper lobby of the Ottawa Convention Centre to see the latest designs from well-known northern names like Nunavik’s Vicki Okpik, Nunavut’s Meeka Kilabuk, Sherlyn Kadjuk, and Elisapee Davidee, along with younger designers like Karliin Aariak and design students from Nunavut Arctic College.

Their creations featured a mix of materials harvested from both North and South: seal skin and long fur trims alongside wool and water-resistant commander. In that sense, the designs said a lot about Inuit culture and how it embraces both the modern and traditional.

And most of the pieces on display were outerwear; luxurious coats and boots designed to keep someone comfortable and fashionably warm in Arctic winter temperatures.

“Normally, we try to target materials that come from the same region as the designers,” said Rowena House, the executive director of the Nunavut Arts and Craft Association. “It has to be culturally relevant.”

NACA, along with the Kativik Regional Government’s recreation department, have coordinated the fashion show at all three Northern Lights events.

“We try to bring a balanced show to the mix, because it’s not just about the territory but about the whole North,” House said.

The fashion show’s popularity is evident as crowds press in to see the models come down the runway. Camera flashes go off and some audience members shout out praise for their favourite creations.

The shows helps provide a boost to northern designers, House said — many of whom had their creations on sale at Northern Lights.

But the fashion show’s popularity might also be linked to a growing interest in natural materials — furs and skins — that is being noted across the North as well as on southern runways.

“We’re noticing bigger designers incorporating seal skin into their fashions,” House said. “And that popularity is growing in the North and the South.”

The demand for those products bodes well for Inuit communities across the country, who still rely on harvesting activities for some of their livelihood.

“It’s important for the North and the demand will drive up prices,” House said, noting a recent auction where Canadian Arctic furs sold for record-high prices.

“I love it,” said Okpik. “I’m always proud to see our work being displayed.”

Makivik created the company in 1999 to employ local seamstresses and market made-in-Nunavik products and culture to the outside world.

But the Ottawa fashion show also provides a boost in business for Nunavik Creations, which hosted a booth at the Northern Lights trade show floor, filled with a colourful array of coats, boots, hats and mitts.

“We sell a lot during the trade show and we get tons of special orders too,” Okpik said. “But best of all, people leave here knowing who we are.” 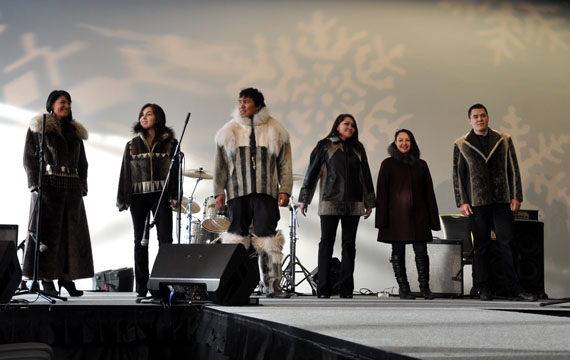 Models take the stage at the wrap of one of many fashion shows hosted at the cultural pavilion of the Northern Lights trade show in Ottawa Feb. 3. (PHOTO BY SARAH ROGERS)