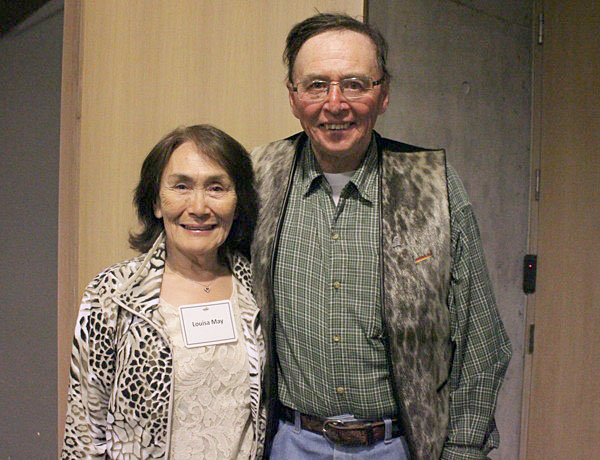 Johnny May and his wife Louisa, who says she had to keep herself busy and rely on help from family when her husband was away for weeks at a time. He was even four hours late for their wedding, she said, because of his work as a pilot. (PHOTO BY LISA GREGOIRE)

There’s an animated scene in the new 3-D documentary about the legendary Nunavik bush pilot, Johnny May, that describes how May helped a nurse keep a sick boy alive on a medevac flight from Kangiqsujuaq to Kuujjuaq.

The boy was suffering from heart failure and the nurse was getting tired of giving him heart massage, so when she needed a break, she would place her patient beside the pilot’s chair so May could pump the boy’s chest while he flew the plane.

There’s another scene that describes how Nunavimmiut, including May, lost their sled dogs during a slaughter of the animals in the 1950s and 1960s.

May, who was away at a flying school in Pennsylvania at the time, didn’t know about it until he returned to find his nine dogs gone.

The dog slaughter, for which the Quebec government has since apologized and given compensation, was particularly devastating, since many communities did not have access to snowmobiles yet and had no way to hunt.

Some families were forced to pull their qamutiit by hand when they went hunting.

The Wings of Johnny May, a National Film Board of Canada co-production with France, is not just a story about a humble pilot who led an extraordinary life — although it certainly is that — but also a story of a people who experienced extraordinary change.

The film’s director, Marc Fafard, who met May in 2008 when film production first began, spoke about this extraordinary change during a question-and-answer session at the Canadian Museum of Nature in Ottawa April 5 after a screening of the film. The screening was part of the museum’s annual Arctic festival, this year entitled Edible Arctic.

Successive governments and churches were responsible for untold damage inflicted on the Inuit of northern Quebec including forced relocations, the dog slaughter, residential schools and the practice of removing bright Inuit children and having them raised in the South to create Inuit “leaders,” Fafard said.

“It was all a means of domination,” said Fafard. “We control you. It was a Stalinist gesture. Assimilation was the intention. It was crazy.”

But despite the resulting impact on the mental and physical health of Nunavimmiut, and the now added uncertainty of life in the North within a rapidly changing climate — all of which are covered in the film — May’s resilience, and that of his family members, including sister Mary Simon, leave viewers with hope for the future.

May, born in 1947 in Kangiqsualujjuaq to Bob Martin May of Manitoba and an Inuk mother named Nancy, decided to become a pilot during a flight to his father’s fishing camp when he was six.

The pilot let Johnny take the controls and after that, he knew he wanted to fly for a living.

He flew his first solo flight at age 16 and has since logged more than 34,000 hours of flying time during a career that spanned 51 years.

He still flies now, at age 67, but his business, Johnny May’s Air Charters, was purchased by Makivik’s Air Inuit in 1988.

An independent producer came up with the idea for the film in the late 1990s, during a trip to Nunavik.

When that producer started working for the NFB, he pitched the idea and it finally became part of the production schedule in 2008, Fafard said.

The 3-D format — stitched together with old home movies, still photographs and animation — gives rich texture and depth to the landscape, but was extremely difficult to capture with a custom-designed, compact, light-weight camera mounted on the bottom of May’s aircraft.

Regular footage, at a fraction of the cost, probably would have sufficed, but in 2008, the NFB was keen to deliver its first 3-D documentary and the story of Johnny May was chosen as the flagship.

During that time, the NFB released a different 3-D documentary instead, on an arguably less stirring subject: cranberry harvesting.

Nonetheless, Fafard and his crew persevered and, after spending about $2 million, they produced a film that premièred at the Cannes International Film Festival in 2013.

The film documents the heroics of May venturing out in storms to find lost people or to fly sick people to hospital in Kuujjuaq or southern Quebec when he was basically the only pilot around.

It shows a re-enactment of him landing with only partial landing gear and landing on ice that cracks and swallows up his plane.

When asked by an audience member afterward whether the two crashes depicted in the film were his only two, there is a long pause and laughter from the crowd before a smiling May delivers his one word answer: “No.”

For most of his career, he flew in areas where topographical maps didn’t exist, and neither did rules about the maximum hours a pilot can fly before taking a rest. It was a vast and uncharted frontier where he landed on tundra or ice, depending on the time of year and the weather.

But despite ample stories to tell, Fafard said it was difficult to convince May to agree to a film about his life. A humble man despite his accomplishments, May attributes his flying prowess to years of practice and said had he been a cook for 51 years, he would have been a great cook instead.

“The worst part was having to do things three times, four times,” said May after the screening, which he attended with his wife Louisa.

He smiles at Fafard before adding, “Can you just do that again?”

There is currently a French and English version of the film and the NFB is hoping to secure funding to make an Inuktitut version.

The film board also hopes to tour the film in Nunavik so communities there can celebrate their homegrown celebrity and hero.