Curator reaching out to collectors to share their works 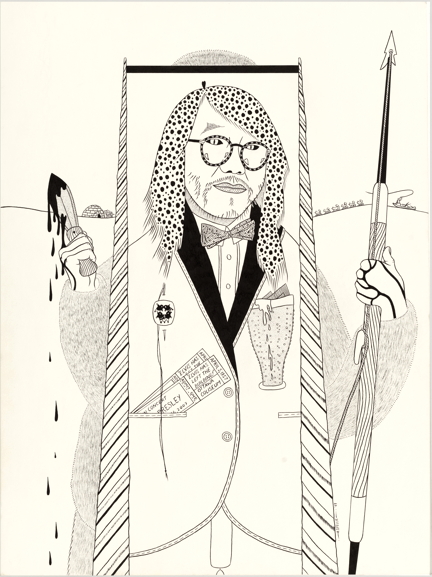 “The Death of Nomadic Life, the Creeping Emergence of Civilization,” 2003, by Alootook Ipellie. (PHOTO BY JUSTIN WONNACOTT) 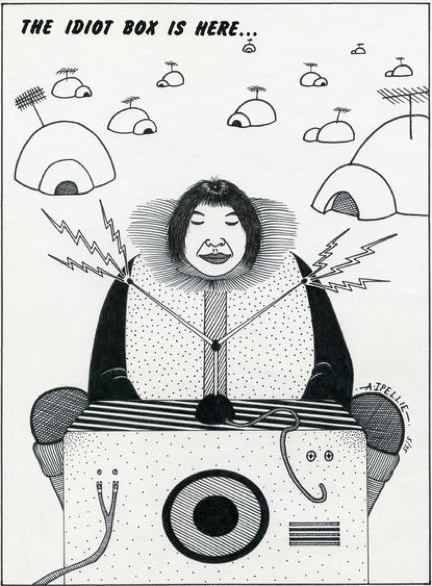 OTTAWA — Nine years after his death, the Carleton University Art Gallery is gearing up to celebrate the life and works of Alootook Ipellie, described by a curator as one of the most unsung Inuit artists of modern times.

Ipellie, an illustrator, photographer, poet and writer, spent most of his adult life in Ottawa, where he had gone to high school. He died of a heart attack in 2007 at age 56.

“He really deserves more recognition. There’s really no one else like him,” said Sandra Dyck, director of the Carleton gallery, where she’s curating the exhibit with Concordia University assistant professor Heather Igloliorte and Christine Lalonde, a National Gallery of Canada curator with expertise in Inuit art.

Despite Ipellie’s obvious talent, it’s been difficult for Dyck to compile a retrospective of Ipellie’s works because, as far as she can tell, only one piece is contained in a Canadian public collection — at the Canada Council art bank.

That ink-on-paper piece, called “Ben-Ho Wins the Biggest Race of his Life, Thumbs Down,” is dated 2007, the year Ipellie died.

Because Ipellie didn’t have a dealer, most of his works are in the hands of private collectors and tracking them down through word of mouth has been a slow, albeit interesting, process.

“It’s challenging but it’s wonderful because people are very much in admiration of his work and his unique vision and they’re very happy to share their memories and their works,” she said.

Dyck has tentatively scheduled the exhibit for 2018 to give herself enough time to locate more collectors and hopefully find pieces from all periods of Ipellie’s life — especially from the 1990s which remains an era currently lacking.

Dyck has been a fan of Ipellie’s since 1992 when she read an essay of his, “The Colonization of the Arctic,” in Indigena, a catalogue of artwork and writings that accompanied an exhibit of Indigenous works at the Canadian Museum of Civilization in Ottawa.

That show was set to coincide with the 500th anniversary of the so-called “discovery of America” by colonial powers and was meant to showcase Aboriginal perspectives of that event, and colonization in general. Ipellie’s essay resonated with her.

Around that time, Ipellie published his avant garde and highly provocative book of writing and ink drawings called Arctic Dreams and Nightmares.

In it, he challenged the notion of “traditional Inuit art” by incorporating themes of sex, humour and violence he’d likely gathered from old Inuit stories and folklore as well as his own ripe imagination.

Some of the works from that book were also displayed at the time at The Manx, a popular Ottawa pub on Elgin Street. That’s where Dyck saw them.

“At the time, I don’t think I made the connection that it was the same person who wrote the essay but the drawings blew my mind. I never forgot seeing them,” she said, in an Aug. 16 interview.

“So all these years later, it’s truly an honour and a privilege to be able to organize this exhibition.”

Shy and soft-spoken, Ipellie possessed a sharp wit, political sophistication and cultural insight, all of which he expressed liberally in both his writing and drawings.

Ipellie also ran a comic strip in the Nunatsiaq News for a while, which followed the antics of characters “Nuna and Vut” in the lead up to, and immediate aftermath of, the signing of the Nunavut Land Claims Agreement in the early 1990s.

In reaching out to friends and colleagues in the art world, Dyck found some of Ipellie’s works in perhaps an unlikely location — at the Richard F. Brush Art Gallery located at St. Lawrence University in Canton, New York.

Catherine Tedford, director of the Brush gallery, explained Aug. 19 that she met Ipellie in Ottawa in 2000 to invite him to an arts festival the SLU used to hold on campus.

Ipellie attended the 2001 festival “From ‘Nanook’ to Nunavut: The Art and Politics of Representing Inuit Culture” and did a reading, Tedford said, as did the late Jose Kusugak.

After that, the university purchased 10 of Ipellie’s works to add to their permanent collection.

Tedford said they use Ipellie’s drawings quite frequently in courses to illustrate northern perspectives on colonialism, the landscape and the environment.

“Alootook certainly presented a very different perspective than the ‘traditional Inuit imagery’ and he was really hitting some political issues straight on the head in ways we don’t often see,” Tedford said.

“I like artistic representations of cultures colliding and his work, I thought, really exemplified that beautifully, and from a northern perspective.”

Tedford said that even though the Ipellie exhibit at Carleton is in early stages, she’s already interested in hosting the show at SLU once the run in Ottawa is over.

If you own a work by Alootook Ipellie and are interested in being part of this upcoming exhibit, Sandra Dyck wants to hear from you.