No funding yet for Grays Bay road-port proposal 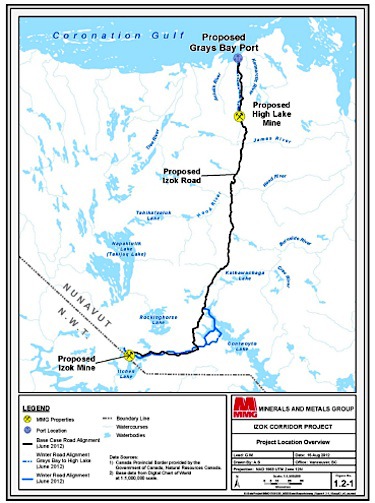 This map shows MMG’s proposed road, port and mine development plan for the Izok corridor, which they put into mothballs because of its high costs. A road proposed within the Gray’s Bay proposal (see map at the bottom of this page) would run through MMG’s Ulu and High Lake properties, but would not directly connect with Izok Lake. (FILE IMAGE)

The federal government is not yet ready to support one of the Government of Nunavut’s biggest infrastructure dreams: the 227-kilometre Grays Bay road-port project in the western part of the territory.

“As far as the Grays Bay project is concerned, it is not at a stage where it can move forward,” Amarjeet Sohi, the minister of infrastructure and communities, said in the House of Commons Sept. 21.

That means Ottawa is not prepared to respond to an application that the GN and the Kitikmeot Inuit Association submitted to Infrastructure Canada earlier this year that asks the federal government to fund up to 75 per cent of the project’s $500 million cost.

Sohi made the statement in response to a single question on infrastructure spending that Nunavut’s beleaguered independent MP, Hunter Tootoo, managed to get onto the public record that afternoon: “Specifically, what is the status of funding for the Grays Bay road and port project?”

The Grays Bay road and port project would link the Arctic Ocean to a winter ice road near the Nunavut-Northwest Territories boundary that leads to Yellowknife.

MMG Ltd., the company that owns the Izok Lake and High Lake lead, zinc and copper properties, originally proposed building a road, port and telecommunication system to Coronation Gulf, but abandoned that plan due to its high costs.

A long line of owners, starting with Falconbridge, Minnnova Corp. and Germany’s Metallgesellschaft in the early 1990s, have sought to develop the Izok Lake deposit, but have been thwarted by the cost of a transportation system, much to the chagrin of the Kitikmeot Inuit Association, who have pinned their economic development hopes on that and other large projects.

Prior to putting its plan into mothballs, MMG estimated the entire scheme — mines plus road and port — would likely require a $6.5 billion investment.

But now, the GN has teamed up with the Nunavut Resources Corp., owned by the Kitikmeot Inuit Association, to build a road and port, possibly as a private-public partnership, that follows a similar route that sidesteps Izok Lake.

The first phase of the Grays Bay road would run through MMG’s Ulu and High Lake properties and end at the defunct Jericho mine. A second phase would extend from there to the Nunavut-NWT boundary.

In a pamphlet issued by the GN, the construction cost for the road-port project is estimate at around $500 million, and that the federal government is expected to fund up to 75 per cent of that amount.

In the Canada Transportation Act Review Report that federal Transport Minister Marc Garneau released earlier this year, the Grays Bay road and port is portrayed as the first step in the creation of a transportation corridor between the Arctic Ocean and Yellowknife, with the federal government’s share of spending on it estimated at about $1.89 billion.

“Finally, development of the Coronation Yellowknife Corridor is recommended, as it would tie together a number of mining projects and provide a deep-water port in the central Arctic,” said the Transport Canada report, which recommended the project be funded immediately.

That would mean—for the first time in Canada’s history—a continuous road connection from southern Canada to a deep water port on the Arctic Ocean.

For that reason, the project also has the support of the Government of the Northwest Territories.

For now, Nunavut Premier Peter Taptuna sees it as a way to move mineral resources to market from the Kitikmeot region.

“It allows us to efficiently move resources from Nunavut to processing or markets elsewhere in the country and across the globe. Nunavut has the potential for exceptional growth and contribution to Canada,” Taptuna said this past January in a speech given at the Northern Lights trade show in Ottawa.

“As premier, my vision is to develop Nunavut and make it a better place to invest. It has some of the richest potential in terms of high-grade metals,” he said.

“I am proud to say that over the summer months we concluded our bilateral agreements for infrastructure investments with all provinces and territories, including Nunavut. We have announced more than $92 million in federal funding for projects in Nunavut in the last few months,” Sohi said.

That means the GN and the KIA may have to wait for the Trudeau government’s highly-anticipated 2017-18 budget next spring, when the Liberals are expected to make good on the lofty infrastructure spending promises they made in the 2015 election campaign.

That, in turn, could trigger another round of negotiations on Canada-Nunavut infrastructure funding agreements.

An earlier version of this story reported that the Grays Bay Road would connect with the Izok Lake deposit. The Grays Bay road, however, would bypass Izok, and there is no current plan to build a spur to that property. 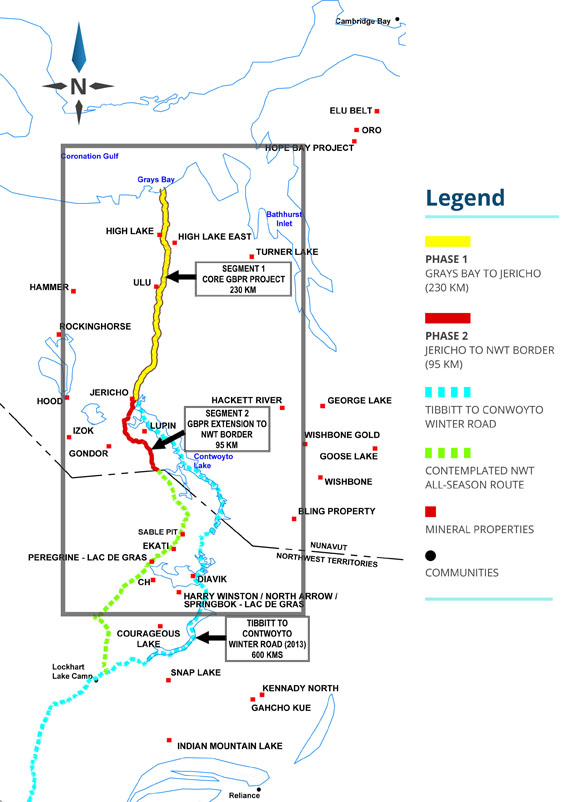 This map shows the approximate location of the Grays Bay road-port project, proposed by the Government of Nunavut and the Kitikmeot Inuit Association. The first phase would terminate at the Jericho mine and the second phase would terminate at the Nunavut-NWT boundary. The route also sidesteps MMG’s Izok Lake property. It doesn’t appear that the federal government is ready to help fund the scheme. (NUNAVUT RESOURCES CORP. IMAGE)