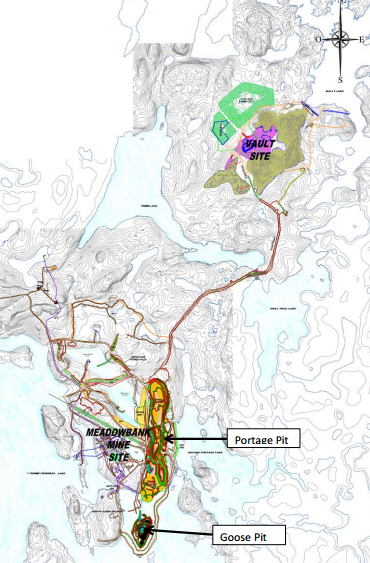 Meadowbank’s Goose and Portage Pits are located in close proximity to the mine’s mill, office and lodging infrastructure, while Vault Pit and the proposed expansion into Phaser Lake are located 8 km northeast of the main mine site. (AEM IMAGE)

The federal government has given its stamp of approval to an expansion at Agnico Eagle Mines’ Meadowbank gold mine near Baker Lake.

Last April, the Nunavut Impact Review Board recommended the expansion of the Vault Pit operation go ahead — a proposal to expand the open put into nearby Phaser Lake.

Vault Pit, located about eight kilometres north of Meadowbank’s main site, is one of three pits currently being mined at the Kivalliq site.

The company first proposed the expansion in July 2014, with plans to fish-out and de-water Phaser Lake to form Phaser Pit and BB Phaser Pit.

The NIRB’s decision, issued April 18, came after a community consultations held in Baker Lake, during which the board heard no outstanding concerns with the proposed project — so long as Agnico Eagle followed mitigation measures spelled out in its original Final Environmental Impact Statement and an addendum.

Indigenous and Northern Affairs Minister Carolyn Bennett signed off on the project in a July 15 letter to the NIRB.

Vault Pit will require significant work, including the dewatering of Phaser Lake, an estimated volume of 700,000 cubic metres.

The “fishout,” when fish are taken out of the lake and transferred to another body of water, is expected to begin later this year.

Phaser Lake has a maximum depth of four to five metres and contains a population of trout and whitefish.

One of the revised project conditions requires the company to report on the results of its fish out in consultation with local HTOs and the department of Fisheries and Oceans.

The company has already dewatered most of nearby Vault Lake under the terms of its existing project certificate and began mining there in January 2014.

Agnico Eagle hopes to extract just over 400,000 tonnes of ore from the expansion of the pit, in addition to the 29.8 million tonnes already set for extraction at the Meadowbank site over its lifetime.

Agnico Eagle, which has reported good earnings to date in 2016, plans to begin mining the new pits in 2017.