Ottawa plans for silent military surveillance in the Arctic 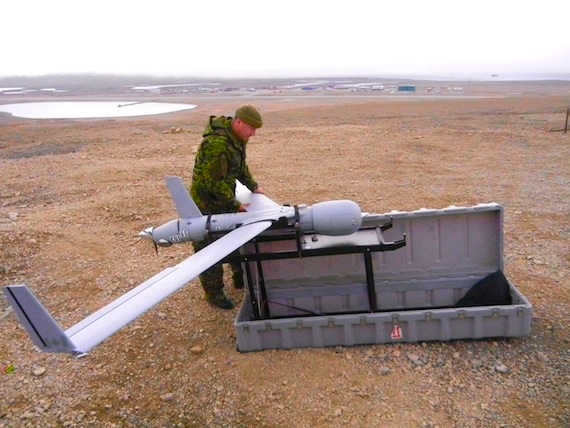 Master Bombardier Stephen O’Brien explains the operations of the Unmanned Aerial Vehicle, which was parked on a hill overlooking the Resolute Bay airport during Operation Nanook. (PHOTO BY JANE GEORGE) 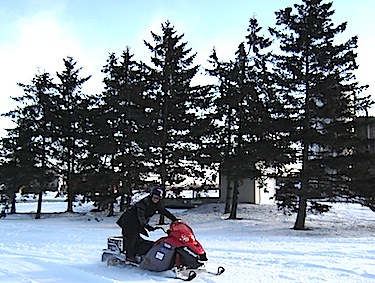 Here’s what the electric snowmobile developed by a McGill University team of engineers looks like. (PHOTO FROM ELECTRICSNOWMOBILE.MCGILL.CA)

Hybrid, gas-electric snowmobiles and tiny, remote-controlled airplanes are among the new silent surveillance tools Canada plans to use in the Arctic.

On a hillside overlooking the airport in Resolute Bay — just above where First Air flight 6560 crashed on Aug. 20 — a tiny airplane was parked during Operation Nanook.

Prime Minister Stephen Harper was also supposed to seen the UAV in action — but that never happened due to the suspension of Op Nanook’s simulated air crash exercise, which was to have taken place Aug. 22.

Weighing only 44 pounds, the sleek carbon-fibre UAV in Resolute Bay — one of several brought in for the excises — felt light to the touch.

Master Bombardier Stephen O’Brien, who explained how an UAV operates, said the mini-aircraft are easy to transport, fast and fuel-efficient — and can be remotely directed to fly at 144 kilometres an hour.

An UAV can keep going for up to 20 hours on less than 10 litres of gas, circling high above the ground and gathering information as it flies.

Infrared sensors help it see in the dark.

From the air, the UAV takes video and records sounds which are then relayed to a control unit — in Resolute Bay, this was a sea container outfitted with several computers,

UAVs can detect and monitor plumes of chemical, biological or radiological weapons, says a document, “Getting the most out of UAVs,” posted on the website of the Ottawa-based Ing Engineering, whose representatives were helping to take care of the UAV in Resolute Bay.

The UAV model there, a ScanEagle built by Insitu, a subsidiary of Boeing, was launched by means of a “SuperWedge” launcher, and recovered using a “SkyHook,” a hook on the end of the wingtip that catches on a rope hanging from a 30 to 50-foot pole.

GPS units mounted on the top of the pole and on the UAV make that tricky link-up work.

The ScanEagle entered service with the U.S. Navy in 2005. Canada has used them in Afghanistan, and they would work in the cold too, according to those present at an UAV demonstration session in Resolute Bay.

Another plus, an UAV is as “silent as a weed whacker” — and “you can’t hear it unless you’re on top of it,” O’Brien said.

The UAV, which costs “less than $500,000,” according to Ing Engineering, is just one of pieces of equipment that the National Defence department’s wants for its future, “covert” operations in the Arctic.

This month, the federal department of public works announced a tender for the development of a hybrid electric-gas snowmobile by March 31, 2013.

Bids for the development of the snowmobile, intended to be much quieter than a solely gas-powered machine, are to come in under $550,000, the tender said.

Given the size of the Canadian Arctic, motorized vehicles are a “necessity,” reads information on the tender, posted by National Defence’s research and development agency.

“The noise level of an internal combustion engine cannot be reduced to an acceptable level for missions where covertness may be required, especially given the increased propagation of sound in cold, dry, Arctic air,” it says. “Electric snowmobiles are a potential solution to this problem, eliminating the internal combustion engine and using a much quieter electric motor to drive the track system.”

While in its electric mode, the snowmobile must be able to travel in a range of at least 15 km and at a speed of 30 km/h on level snow without recharging. It must be able to reach a top speed of 75 km/hr.

In its gas-power mode, the snowmobile must be able to maintain a speed of 30 km/h while towing a payload of 250 kilograms on a sled, and it must have a range of at least 100 km.

“It also must have the ability to switch to ’silent’ mode easily and quickly with minimal tools, at which point it can function solely on electrical power,” the tender says.

A similar, electric only, snowmobile is already under development at McGill University.

Called the Wendigo after “the spirit of lonely places, it’s been tested out at the Greenland Summit Station by scientists who didn’t want to contaminate their snow samples with any emissions from a gas-powered engines.

The electric snowmobile allowed scientists to double their productivity by carrying more and travelling more than they previously did on cross-country skis, said the website of the McGill Electric Snowmobile Team.