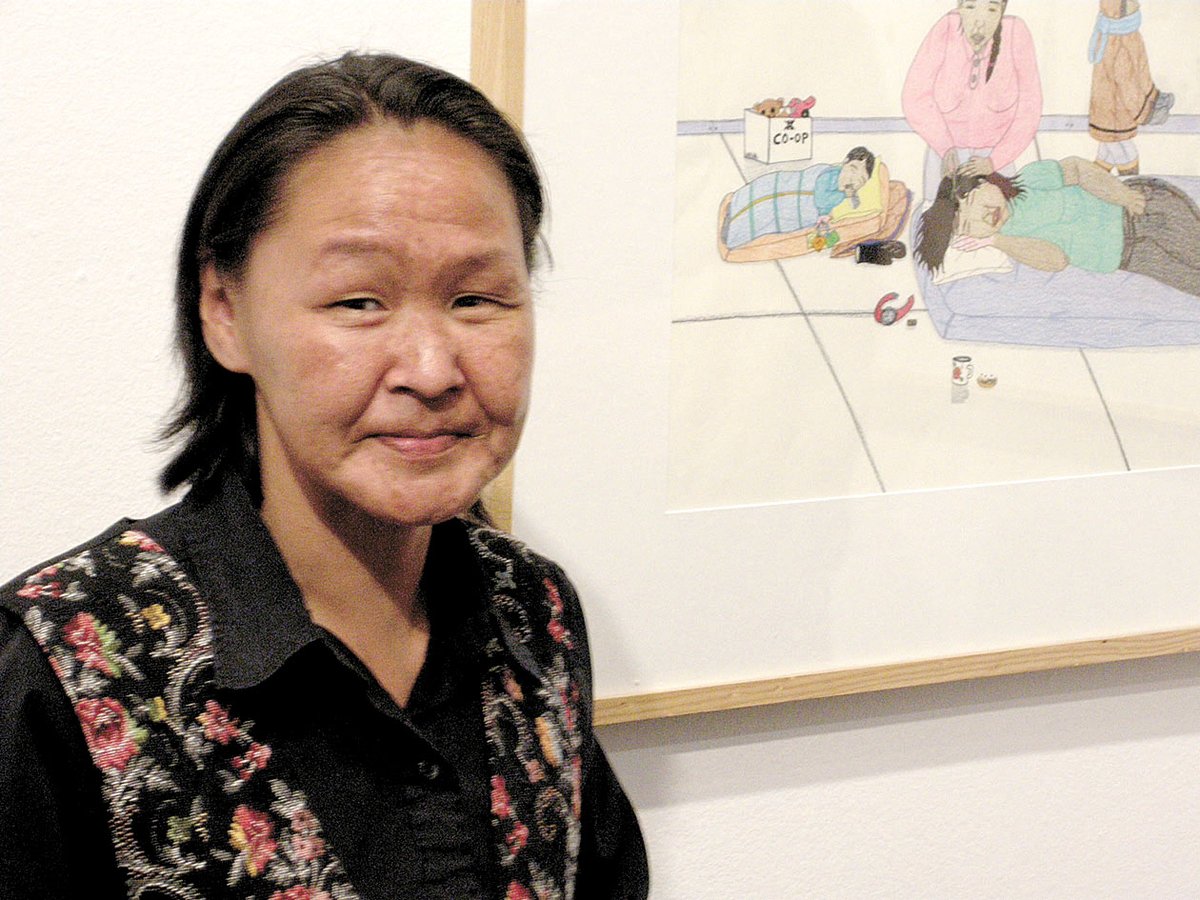 The late acclaimed artist Annie Pootoogook at a 2009 show of her work in New York City. Nunavut Inuit are upset with the police investigation and reaction to the artist’s sudden death. (FILE PHOTO)

Nunavut Inuit are calling on the Ottawa Police Service to take tougher action against one of its members accused of posting a racist online reaction to the death of artist Annie Pootoogook.

The acclaimed Cape Dorset artist was found dead in Ottawa’s Rideau River Sept. 19, in the city she had called home for more than 10 years.

Police have since launched an investigation into her death, assigning its major crimes unit to reconstruct the events that led up to the 46-year-old woman’s death.

The OPS initially ruled out any foul play, but the force now says police are looking into some “suspicious elements” connected to the case.

But now the force has opened yet another investigation, this time into the conduct of an OPS sergeant who allegedly made offensive remarks under a news story on Pootoogook’s death.

Two comments posted Sept. 24 under an online Ottawa Citizen story dismiss the need for any police investigation and point to addictions as the cause of the artist’s death.

Ottawa-based news organizations saved the two comments before they were removed by their alleged author, Sgt. Chris Hrnchiar.

“Because much of the aboriginal population in Canada is just satisfied being alcohol or drug abusers, living in poor conditions etc…..they have to have the will to change, it’s not society’s fault,” the first post read.

“And of course this has nothing to do with missing and murdered Aboriginal women…..it’s not a murder case…..it’s (sic) could be a suicide, accidental, she got drunk and fell in the river and drowned who knows…..typically many Aboriginals have very short lifespans, talent or not.”

Ottawa police spokesperson Const. Chuck Benoit said the force has opened a chief’s complaint investigation this week to look into the comments.

But the comments have already called into question how the police force is treating Pootoogook’s death, or that of any Indigenous resident who dies in similar circumstances.

While Pootoogook was an internationally-acclaimed artist, she had spent recent years living on and off of Ottawa’s streets while dealing with addiction.

“It is 2016 and this nation is dealing with [the issue of] missing and murdered Indigenous women,” said Sytukie Joamie, an Ottawa-based relative of Pootoogook.

“Even though this is going on, you have a police officer in the nation’s capital making disparaging remarks, a protector of society who has this attitude about Aboriginal people.”

Joamie said Ottawa police should have a separate agency look into the complaint.

“There’s no credibility,” he said. “This is a sergeant, which means he manages other police officers.”

Nunavut’s MLA for South Baffin, David Joanasie, said that law enforcement needs to hold its officers to a higher standard in 2016.

“To be labelling the artist, and the whole Indigenous community, like that, I think it calls for strong disciplinary action if not dismissal in this case,” Joanasie told Nunatsiaq News.

“Racism has to end. How long are we going to have to deal with this?”

Nunavut’s MP Hunter Tootoo, himself a recovering addict, tweeted in response to the offensive comments.

Depending on the type of complaint, Benoit said that officers under investigation are sometimes re-assigned duties, but he would not comment on Hrnchiar’s work status while the force looks into his conduct.

Benoit could not indicate how long that investigation might take, but said its results would be made public if the force decides to press charges against the offending sergeant.

OPS provides its officers training on “all types of sensitive matters,” including, but not limited to, awareness around the issues that Indigenous groups face, Benoit added.

“It’s sad that Annie left us,” Joamie said. “But there are some concrete things that can come out of this to help her people.”

Joamie said he had been concerned about Pootoogook since the last time he saw her, at an Ottawa-area pow-wow last July, when the artist told him she’d been having trouble finding a steady place to live. At the time, he said she was living on and off with her partner.

But Joamie, who volunteers at an Ottawa drop-in centre frequented by Inuit clientele, said Pootoogook’s partner was banned from the centre for allegedly attacking her.

Many of Pootoogook’s Ottawa-based friends and family were concerned she was in an abusive relationship, Joamie said.

“After she was found, I went into the friendship centre and the discussion was: this is suspicious. Nobody just walks into the water.”

Police have yet to release Pootoogook’s cause of death.

In the meantime, the force is still asking people who knew and spent time with Pootoogook in the weeks leading up to her death to contact the OPS with any information they might have.

“We’re still trying to piece together the time frame and the locations she was in prior to her body being found,” Benoit said.