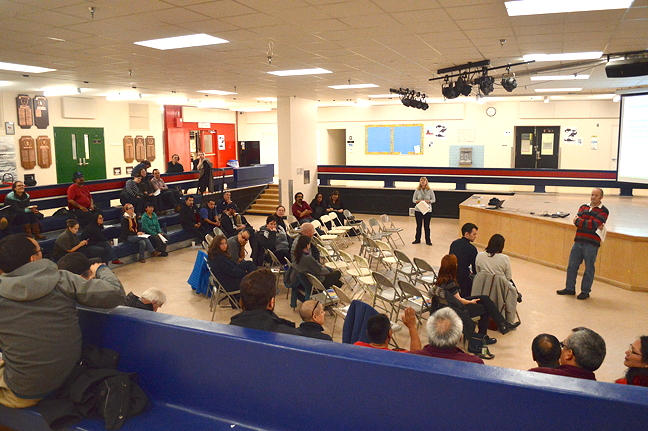 About three dozen Iqaluit residents gather at Inuksuk High School Sept. 26 to tell a hired firm what they like, and to a larger extent, what they don’t like about the Nutrition North Canada food freight subsidy program. The firm is tasked with gathering input in cross-Canada consultations and will report back to the federal government with their findings. (PHOTO BY STEVE DUCHARME)

The town hall meeting was part of a series of cross-Canada consultations—announced by Indigenous and Northern Affairs minister Carolyn Bennett this spring—organized to collect input on what Ottawa can do to improve the heavily criticized program.

Long-standing criticism of the program made it a hot topic during last year’s federal election; with Liberal, Conservative and New Democratic parties all promising reform.

On Oct. 1, some 37 additional communities outside Nunavut will be brought under the program as part of a promise made by Prime Minister Justin Trudeau on the campaign trail.

But criticism was back on the menu during the two-hour consultation in Iqaluit, with official “talking points” repeatedly derailed by the sheer volume of comments from attendees.

“I feel like Peter is being robbed to pay Paul,” said one member of the audience, who believed Nutrition North’s subsidies on perishables “skyrocketed” the cost of everything else.

Many others criticized the foods and other items on the list of products eligible under the subsidy.

One attendee criticized the absence of flour on the subsidy list which she said could reach absurd prices—especially in remote communities—in comparison to southern markets.

Another man, who said he works at the local food bank, suggested more scratch ingredients be included in the subsidies, especially sugar.

“We get asked all the time [for sugar at the food bank]. It’s the only one people will go out of their way to ask for,” he said.

Others asked for the inclusion of country food in the program, including Iqaluit Sinaa MLA Paul Okalik who said he would like to see NNC subsidies apply to the private sale and transportation of country food across the territory.

“Please, allow us to enjoy our own food. Its far more nutritious than what you bring up here and we prefer it,” he said.

Still more attendees called for stricter penalties by the government for alleged “late” shipments of perishable food by retailers, who they said prioritize other, less time-sensitive, products on air shipments.

While Nutrition North and INAC employees were in the audience during the consultation, the meeting was officiated by a third-party contractor specializing in public communications.

As such, the suggestions and comments from participants were not directly addressed, but will be included as part of a report being prepared for the federal government on the program.

At the end of the meeting, officials summarized what they believed were the priorities suggested at the meeting, including:

• to prioritize service and subsidies for those items deemed most in need such as focusing subsidies on a smaller list of items and further lowering their the retail cost;

• to tailor food profiles for each community: many agreed the needs in Iqaluit might be different for those in smaller communities so NNC should reflect those needs on a community-by-community basis;

• to prove more transparent subsidies “at the aisle:” Many said that, while they’re shopping, they want to see how much they save on products, particularly between brands, instead of waiting for their cashier’s receipt; and,

• to provide Inuktitut-speaking Nutrition North liaisons for unilingual customers, as well as further funding for home economics classes at the high school level;

The Nutrition North consultations will continue Oct. 4 in Hopedale, Labrador.

Two more Nunavut visits are scheduled in Baker Lake and Kugaaruk, but INAC has yet to release the dates.