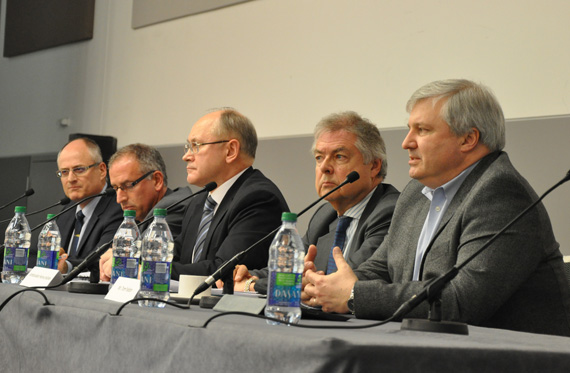 OTTAWA — As Canada’s chairmanship of the Arctic Council nears its halfway mark, efforts to create a circumpolar business forum are still taking shape.

Nunavut MP and Arctic Council chair Leona Aglukkaq formally announced the Arctic Economic Council Jan. 29 at the opening of this year’s Northern Lights trade show in Ottawa, which has grown into an annual showcase of business and culture from Nunavut, Nunavik and Nunatsiavut.

This year’s Northern Lights also includes, for the first time, international delegations from Greenland, Finland, Russia and the United States.

‘We envision the Arctic economic council to be a way for Arctic businesses to engage more directly with the Arctic Council states and indigenous permanent participants,” Aglukkaq said in a Jan. 29 keynote address at the Ottawa Convention Centre.

“It will facilitate and foster business opportunities, but it will do so with sustainable development in the Arctic in mind and it will contribute to a stable, predictable, transparent business climate.”

Arctic Council members first approved of the initiative at a ministerial meeting in Kiruna, Sweden this past May, when Canada first took over the council’s chairmanship.

And for the last seven months, an international task force has been charged with developing a business forum with representation from the Arctic Council’s eight member states.

Over time, the idea of a forum has given way to a more permanent council or advisory group that would report directly to the Arctic Council on circumpolar business and economic development issues.

Task force members took part in a panel discussion at the Northern Lights conference Jan. 29, highlighting the focus of the economic council as it moves forward.

Mitch Bloom, vice-president of CanNor and a co-lead on the task force, said that resource development would serve as a primary focus for the Arctic Economic Council, followed by infrastructure, shipping and tourism.

But the council must also cater to medium and small-sized businesses — particularly Aboriginal-run business, he said.

“Looking at it from a Canadian perspective, I think we’re hoping to get advice from this Arctic Economic Council on how businesses can better work with (Arctic) communities,” Bloom said.

“Our view was to make sure whatever is created is inclusive of a broad set of business interests.”

That sentiment was echoed by Baffinland CEO Tom Paddon, whose company is developing the Mary River iron mine project on Baffin Island.

“We’re really at the start of this, I think there’s so much more to be explored,” said Paddon, who took part in the Jan. 29 panel discussion. “We haven’t quite figured out how to create a long-term vocation for people who live in the Arctic.”

Paddon says a pan-Arctic economic council could help by laying out the facts about business development across the north.

“There are plenty of practical opportunities and advantages that will trickle down (even) to smaller businesses, simply by sharing best practices,” he told the conference.

The task force, co-chaired by Canada, Finland, Iceland and Russia, still has much to determine, such as who will sit on its proposed economic council and what role businesses will have.

But Anton Vasiliev, Russia’s ambassador to the Arctic Council, said the timing for the Arctic Economic Council is right, while his own country looks to developing its Arctic regions.

Shipping through Russia’s Arctic waters doubled from 2012 to 2013, while the country has only just begun to exploit oil beneath its Arctic offshore waters.

“It’s no more talking, we are doing things,” Vasiliev told the conference. “So the question of doing things better is on the agenda for us.”

“Businesses are looking for some more reliable information when they’re considering major investments in the Arctic,” Vasiliev said. “I think we all agree on the Arctic Council that this is the best platform and best way to discuss Arctic issues.”