Terry Audla: “Inuit in the circumpolar world are all the same people, and we use the same language” 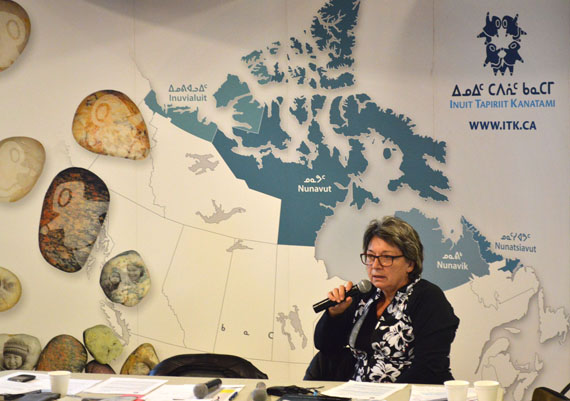 Mary Simon, former ITK president, Canadian Arctic ambassador and panelist at the language summit in Iqaluit this week, delivers her closing remarks. In them, she described a recommendation from the summit to adopt a standardized form of written Inuktut, based on Roman orthography. (PHOTO BY STEVE DUCHARME)

The Atausiq Inuktut Titirausiq group will recommend a shift to Roman orthography for all written Inuktut, following the Aug. 26 conclusion of a summit in Iqaluit that brought together numerous representatives from the Inuktut-speaking world.

They’ll present the draft to the National Committee on Inuit Education Sept 9.

“Existing writing systems have been imposed on us. Canadian Inuit now have an opportunity to choose and create our own unified writing system,” the draft said.

“The recommendation from this summit is for jurisdictions to formally explore the implementation of an Inuit writing system rooted in a standardized form of Roman orthography that is developed by Inuit, for Inuit, and introduced through the education system…”

Many of the summit’s attendees expressed fear that a unified writing system would drastically alter, or even erase, unique regional dialects.

But the draft recommends that the syllabics system “could continue to be taught in school at higher grades, in communities where syllabics have traditionally been used.”

“[A unified writing system] would be gradually implemented through the education system, starting with kindergarten. We have been saying that in all of our consultations” said AIT Task Group member Jeela Palluq-Cloutier.

“People that will be impacted most immediately will be publishers, because teaching materials will have to be produced. But for day-to-day Jane Does and John Does — they won’t see the change right away.”

Audla, who also emceed the summit, believes there was momentum for change at the event and he is optimistic that movement towards a unified writing system is possible.

“Inuit in the circumpolar world are all the same people, and we use the same language. There is no reason why we should be using a different writing system based on artificial boundaries,” said Audla.

The biggest obstacle, for him, will be to continue the summit’s momentum into the next steps of standardization.

A crucial objective behind any unification would be to fully utilize and promote Inuit culture in the digital millennium: by providing Inuit with typography to communicate more effectively through social media and other electronic platforms.

Experts in the Greenland form of Inuktut spoke at the unification summit and suggested much of the modern practicality of Greenland Inuktut, which uses the Roman alphabet, comes from its electronic applications.

Several English websites are now able to transliterate to Greenlandic Inuktut and vice versa, allowing Greenlanders to maintain their language without isolating themselves from the electronic community.

Audla believes it’s a powerful tool to have.

The final recommendation for the summit was based in part on reports by AIT members, who were tasked with travelling to Inuit communities across Canada and consulting elders and locals on a unified system of writing.

Workshops were also held with visiting members of Inuit communities during the summit, which ran Aug. 25 and Aug. 26, to discuss any accommodations a unified writing system would have to include to win support across Inuit Nunangat.

AIT members met Aug. 27 in private to analyze the findings of the two-day summit and discuss future steps.

The recommendation acknowledges that “land claim organizations, language authorities and governments will make their own decisions for moving forward,” and participants in the summit look forward to more dialogue.

ITK released an amended version of the recommendation today asking that a progress report on the summit’s findings be made in one year’s time.