“All this cover-up. That’s not how it should be. This is a corrupt government, keeping secrets.” 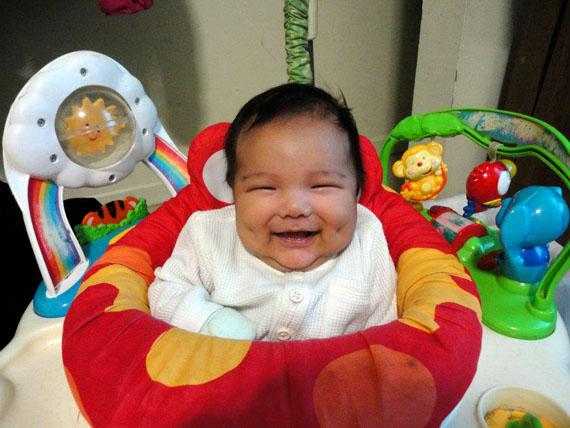 In this picture, posted on Facebook three days after his death, Baby Makibi is all smiles. “He knew he was the big boss man,” said his father, Luutaaq Qaumagiaq. (PHOTO COURTESY OF LUUTAAQ QAUMAGIAQ) 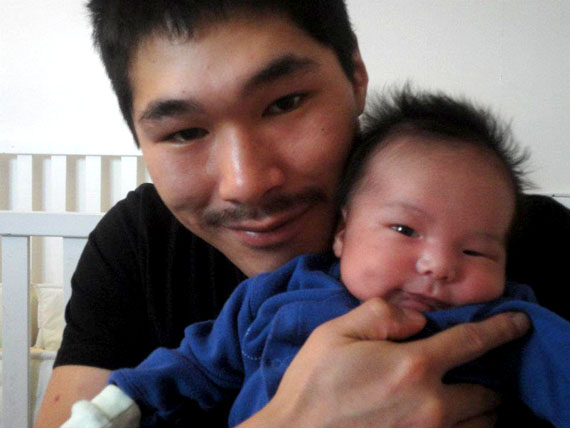 Baby Makibi and his father, Luutaaq Qaumagiaq, pose for a picture, posted to Facebook on Jan. 25, 2012. “Why did my son die?” Qaumagiaq said in a recent interview, demanding a full coroner’s inquest into the death of his three-month-old son in April 2012. (PHOTO COURTESY OF LUUTAAQ QAUMAGIAQ)

When it comes to getting answers about the 2012 death of their three-month-old son, Cape Dorset parents Luutaaq Qaumagiaq and Neevee Akesuk are used to getting the silent treatment from Nunavut’s chief coroner’s office.

But the young parents have reached the end of their patience and are demanding that a full coroner’s inquest be held into the death of their baby boy, Makibi Olayuk Akesuk.

“I’m fed up. Why isn’t there an inquest? Why did my son die?” Qaumagiaq told Nunatsiaq News in a recent interview.

“Why aren’t they doing an inquest into our son’s death?” Akesuk asked in the same interview.

For 18 months after their baby’s death, the parents allege they were misled about the cause of their son’s death by Nunavut’s chief coroner, Padma Suramala.

Even today, they are waiting for Suramala to respond to their request for a coroner’s inquest and, considering the case seems to have been mishandled from the start, they can’t understand why an inquest hasn’t been triggered.

The role of a coroner is to speak for the dead to protect the living — by finding out how someone died and how similar deaths can be avoided in the future.

But Suramala has maintained a near-perfect silence in the face of controversy and questions swirling around Baby Makibi’s death, the Cape Dorset parents allege.

In response to an interview request for this story, Suramala replied that it “would not be appropriate” for her to “explain or justify” her decision not to hold an inquest.

His death made national news in October 2014 after a CBC investigative story alleged the infant died of a treatable lung infection.

The story also alleged that the local on-call nurse, Debbie McKeown, told Makibi’s mother over the phone — hours before the baby’s death — to bathe her sick child instead of bringing him into the health centre.

A Nunavut government health policy says that all infants under the age of one year must be seen in person if presenting any sort of symptoms.

Makibi was congested and unwell on the day before he died, the CBC story said.

In February 2014, Paul Okalik, Nunavut’s minister of health and also justice minister responsible for the coroner, ordered an external review into the steps taken by Nunavut health care professionals after the infant’s death.

That review is expected to be completed by the legislature’s fall sitting in November 2015.

But Makibi’s parents say Okalik should have called for a coroner’s inquest, which would examine the events and circumstances before the death as well as after.

The review should include, for example, the nearly 20 complaints filed against McKeown before Baby Makibi died, Neevee Akesuk said.

“They had these complaints way before I got Makibi, when he was still inside me.”

Some coroner’s inquests in Nunavut are mandatory, such as when someone dies in police custody.

But according to Nunavut’s Coroners Act, the chief coroner can call an inquest for a number of reasons.

Those reasons include “to inform the public of the circumstances of the death where it will serve some public purpose,” and “to bring dangerous practices or conditions to the knowledge of the public and facilitate the making of recommendations to avoid preventable deaths.”

Qaumagiaq and Akesuk said an inquest into their son’s death would help Nunavummiut get the health care treatment they deserve by highlighting the circumstances leading up to their baby’s death.

Their MLA, David Joanasie, seems to agree. The member for South Baffin tabled a petition in the legislature in May, signed by over 1,200 people from around the world, calling for a “full investigation” into the infant’s death.

“The truth, whatever it is, we want it to come out,” Joanasie said in an interview.

“If an inquest will provide any degree of closure, then that’s ultimately what I want the family to gain.”

Chief coroner Suramala initially determined the cause of Baby Makibi’s death to be sudden infant death syndrome, or SIDS.

SIDS is the unexpected death of an otherwise healthy baby, and can only be diagnosed when all other possibilities have been eliminated.

A forensic pathologist performed an autopsy on Baby Makibi in Ottawa in April 2012.

The infant’s body arrived in a light blue jumper and socks, the autopsy report later said. There was also a blue blanket with teddy bears, and disposable diapers.

That report, shared with Nunatsiaq News, found that a viral infection in both lungs caused his death.

But Akesuk and Qaumagiaq say Suramala never told them that and appeared to try to hide the autopsy results from them.

“She made sure we thought it was SIDS,” Akesuk said, adding that the coroner told them on two occasions the cause of death was SIDS.

And when the autopsy report proved that diagnosis incorrect, the parents say Suramala did not call them back to tell them so.

That’s important because Akesuk, guilt-ridden, had been wondering if she could have prevented his death.

Studies have shown babies sleeping on their stomachs — as Makibi did on the night he died — can be connected to SIDS.

The grieving parents say they called Suramala about five times and the local coroner twice to get Makibi’s autopsy result.

It wasn’t until more than 18 months had passed, and after they got the RCMP involved, that the local coroner finally handed over that report, Akesuk said.

And yet, in her brief written response to Nunatsiaq News’ interview request, Suramala said it is her practice to “ensure the next of kin is fully informed of the results of any coroner’s investigation or autopsy.

“I have followed that practice in the case of Makibi Akesuk,” Suramala wrote.

Here’s what that autopsy report said: Makibi’s lungs weighed twice as much as a healthy 3-month-old baby’s lungs and had “moderate to marked” congestion throughout the lung tissue, “limiting the air spaces” available for breathing.

That means he died by drowning in the mucus that filled his lungs.

Yet in her two final reports on the infant’s death, written after she knew the autopsy’s results, Suramala still based one of her recommendations on the initial SIDS diagnosis.

“I further recommend that consistent message be given to parents about… risk factors associated with [SIDS],” Suramala wrote in a July 2012 report on the infant’s death.

In a supplementary report, Suramala wrote that Baby Makibi died “as a result of” the viral lung infection, yet she classified the manner of death as “unclassified”— a label other experts say is baffling.

Milroy, trained in the United Kingdom and Canada, said he is under contract to Nunavut’s coroner’s office, but has no first-hand knowledge of this case.

Those five manners of death are: homicide, suicide, accidental, natural and undetermined.

“Undetermined” is used to categorize a death when there isn’t enough evidence to use any other category, Milroy explained.

“Natural” is used when someone dies of a disease or virus.

“The bottom line is if you have a viral infection causing death… then that would be a natural death, normally,” Milroy said.

“Unclassified” is a rare and controversial category without a clear patterned use in North America, the pathologist added. It’s sometimes used for drug-related deaths.

“I’m surprised [Makibi’s death] is called unclassified. That’s not a determination I would have expected.”

He told Nunatsiaq News that if the autopsy report says a viral infection caused the death, then it is contradictory to classify the manner of death as anything other than “natural.”

“If that’s what the report says the cause of death is, it cannot be unclassified. It’s natural,” Curtz said in a recent interview.

Demands for an inquest

In the last few months, Gwen Slade — the whistle-blowing nurse who first brought this story to the CBC’s attention — raised many of these same questions with Suramala in correspondence shared with Nunatsiaq News.

On March 21 Slade, who was Akesuk’s initial prenatal nurse before Baby Makibi was born, sent the coroner a formal request for a coroner’s inquest into the infant’s death.

According to the Coroners Act, if an inquest is not held into a death, “a next of kin or other interested person may request that the coroner hold an inquest.”

Suramala declined Slade’s request, saying Slade was not an “interested person” because “a nexus between you and the deceased must be established.”

Suramala also declined Slade’s request because the circumstance of Baby Makibi’s death was determined to be outside the list of circumstances which would allow for an inquest.

But Slade argued Baby Makibi’s case is included in that list, specifically “where the death occurs as a result of apparent negligence, misconduct or malpractice.”

Slade argued that standard was met when nurse McKeown refused to see the infant the night he died, contrary to governmental policy.

Suramala disagreed, and denied the request.

On May 31, Qaumagiaq sent Suramala an email saying that he and Akesuk “fully support our friend Gwen Slade” in her request for a coroner’s inquest.

“We know a virus caused his death, we know the method by which he died, [but] we need to know why our first-born son died,” Qaumagiaq wrote.

“In your reports, you admitted that the nurse [McKeown] did not follow the standard policies and guidelines… We need an inquest to determine if this was a negligent death, if there was misconduct or malpractice.”

On June 1, Suramala replied to Qaumagiaq, writing, “I will clarify your concerns and questions in this case.”

Suramala wrote that only those “directly related to the deceased” can request an inquest, and that she would provide “complete detail” of the circumstances of Makibi’s death to Qaumagiaq.

“I will keep you posted in the near future with your concerns as to wanting an inquest.”

Qaumagiaq replied the same day: “So are you saying an inquest will be conducted? If so, when will it be done?”

But since June 1, Qaumagiaq has received no response.

Qaumagiaq and Akesuk are now left wondering if the coroner, the health minister and Government of Nunavut officials have something to hide.

“All this cover-up. That’s not how it should be,” Akesuk said.

“This is a corrupt government, keeping secrets.”

“The circumstances of our son’s death need to be determined in order for his death to be classified,” Qaumagiaq said.

The first document is an email from Luutaaq Qaumagiaq, the father of Baby Makibi, to Nunavut coroner Padma Suramala, requesting an inquest into the death of his three-month old son, with a reply from Suramala.

The second document is a copy of the coroner’s report, dated July 24, 2012, that says Makibi died of a cytomegalovirus infection in his lungs. His family, however, says that for 18 months they were told he died of sudden infant death syndrome, or SIDS.