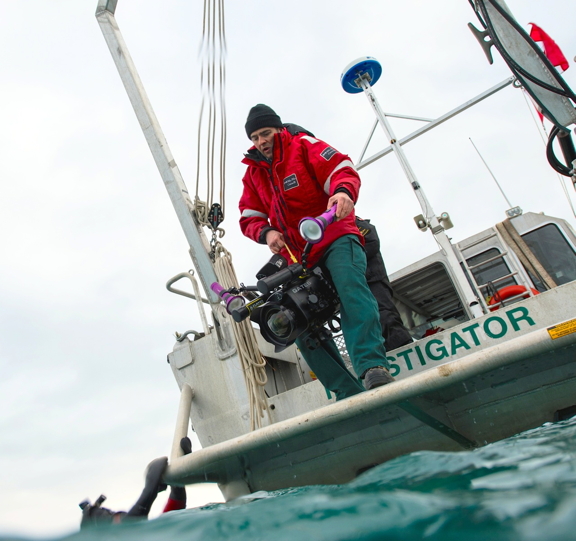 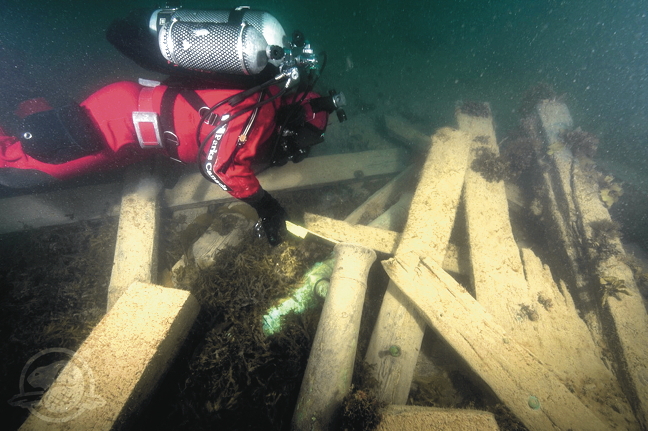 Parks Canada’s six-year quest to find the lost ships of the doomed Franklin expedition ended their 2014 search campaign on a high note last month, when archaeologists got a first glimpse of HMS Erebus at the bottom of Queen Maud Gulf.

Two “intensive days” of undersea diving was all Parks Canada searchers managed to squeeze in during their two-month summer campaign before the first signs of Arctic winter sent them packing for Ottawa.

“We made the most of that brief opportunity,” Ryan Harris, Parks Canada’s lead archaeologist for the Erebus and Terror survey, told Nunatsiaq News.

“It’s absolutely spectacular. I’ve just never seen anything like it,” Harris said of the underwater wreck, which he documented by Sept 26.

The dives were the most recent milestone in a six-year search that began in 2008, led by Parks Canada.

The search for the two shipwrecks of the doomed 1845-46 Franklin expedition through the Northwest Passage expanded year after year to include an unprecedented number of public and private agencies.

Heading up a team of eight Parks Canada divers, Harris, who has led the sea-based search since the start, crammed in as much diving as possible to document the site with high-resolution photographs, high-definition video and measurements.

The crew left the site in the eastern Queen Maud Gulf as temperatures dipped well below zero, having confirmed the 34-metre-long sunken vessel as HMS Erebus.

“We also wanted to get a handle on the logistics of working at that site in the months and years to come,” said Harris, mindful of the next stage of archaeological work to follow, which will take place in August and September of 2015.

“As an archaeological and underwater site, it’s complex and novel, in that it’s a significant three-dimensional structure that we’re going to have to figure out to work inside the interior spaces,” he said.

Discovered Sept. 7, the shipwreck’s location corresponded well with Inuit testimony, collected and documented by British and American seafaring search crews around King William Island from about 1850 to 1879.

Both vessels, commanded by Sir John Franklin of the British Royal Navy, were locked in winter ice in the seas of Victoria Strait in 1846.

Inuit lore stated that the freezing seas eventually crushed one of the vessels. The other drifted south, and came to rest in a place known to local Inuit as “Utjulik,” said Harris, or “place of bearded seals” in English — located in an eastern area of Queen Maud Gulf.

Parks Canada’s six-year search effort drew on 19th-century Inuit testimony — with help from author-mariner David Woodman and the work of Inuit historian Louie Kamookak to narrow down the search areas.

Once gale-force winds subsided after a three-day wait, Harris and co-diver Richard Moore took the first dive in calm waters.

Among the ship’s features, Harris spotted modifications to guard the ship against Arctic ice conditions.

One unexpected innovation was a set of vertical railings in the rear of the ship, which “allowed the propeller to be retracted when going into winter quarters, so the ice wouldn’t shear it away,” he said.

The divers noted skylights on the ship’s upper deck, including one “overtop the wardroom, where the senior officers would have taken their meals,” Harris said.

In a forward section of the ship, Harris and Moore were able to lower a camera through an exposed opening, for a view of the common sailors’ quarters.

Harris described it as the space where Franklin’s sailors “messed and swung their hammocks, and where they spent their difficult final days.”

“The site has fantastic potential,” Harris said. The survey party’s first task was to chart the ship’s large-scale features “that have helped us identify which ship it is.”

Franklin commanded the expedition from HMS Erebus. He died June 11, 1847, when the ships were still lodged in the ice of Victoria Strait, northwest of King William Island.

On April 22, 1848, some 105 surviving members of the original 129 crew abandoned the ships for King William Island, and set out on long trek south. All members appeared to have died on, or near, the island within the next two years.

“We always believed that the fate of the ships had diverged, from the point where they were abandoned together in Victoria Strait,” Harris said.

Erebus’ final resting place is more than 150 kilometres south of the position where the crew apparently abandoned the ships.

Some Inuit testimony suggests, however, that the Erebus may have hosted some survivors just before it sank at its final resting place, west of Adelaide Peninsula in Queen Maud Gulf.

Doug Stenton, director of heritage for the Government of Nunavut, notes that some Inuit accounts describe “evidence that they saw footsteps in the snow” outside of the ice-bound ship.

“Does this mean that one of the ships was in fact re-manned?” Stenton told Nunatsiaq News. “Was it sailed there? Will there be other evidence found that people were onboard?”

“There’s a lot of other interesting questions that the discovery generates, on which Inuit oral history may have a direct bearing,” he said.

“Some of this will depend of course on the things that come up from Ryan’s and his team’s work on the wreck itself,” Stenton said of Harris and his survey team.

Stenton led the Government of Nunavut’s ground-based search party in this year’s campaign to find the wrecks.

Parks Canada will return to the Erebus wreck in August and September next year to document the wreck in more detail.

Harris also said that the Parks Canada-led campaign to find the wreck of Franklin’s sister ship, HMS Terror, will continue.

“Quite possibly, there could be information on Erebus that could shed light on what happened to the Terror,” in the form of written materials preserved in the shipwreck, Harris said.

“We’re very, very excited at what we stand to find during the future investigation of the Erebus.”

Searchers believe the wreck of HMS Terror is in Victoria Strait. Surveyors have already swept about half the target area to no avail, Harris said.

“So if we’re allowed to continue that search, I would like to think we’ll be successful there, as well.”

This year’s search cost the Government of Canada about $270,000, Harris said.

The federal government has identified the Erebus wreck site as a National Historic Site of Canada, administered by the Government of Nunavut.