Underwater video, photos, will help plan this summer’s dive to the wreck site 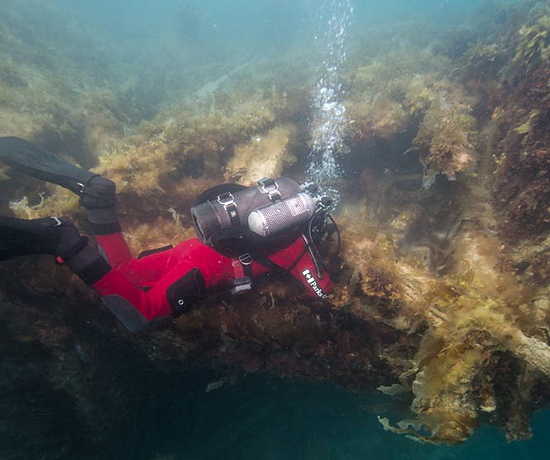 A Parks Canada underwater archaeologist examines the stern of the HMS Erebus, the most damaged part of the ship’s hull, during a dive operation in summer 2016. A Parks Canada team is now planning their summer dive to the HMS Terror wreck site by deploying underwater remote-operated vehicles through the ice to take photos and videos of the Sir John Franklin ship which sank in 1845. (PARKS CANADA PHOTO)

The ice hasn’t even disappeared yet but Parks Canada’s underwater archaeology team and has already arrived in Gjoa Haven to begin this year’s examination of Sir John Franklin’s sunken HMS Terror.

With help from an archaeologist from the Government of Nunavut, the Gjoa Haven Hunters and Trappers Association, and CAP Enterprises Ltd., the team will bore through two metres of ice and deploy remotely operated underwater vehicles, “to collect photos, videos and scans of the wreck,” says an April 28 news release.

The HMS Terror—discovered amidst some controversy last summer in the aptly named Terror Bay near Gjoa Haven in September 2016—sank along with her sister ship, the HMS Erebus, in Nunavut waters during Franklin’s doomed 1845 expedition in search of the Northwest Passage.

Scientists, history buffs and Inuit alike spent more than a 150 years searching for the two ships and many are now keen to find out what remains of them and what artifacts will be recovered.

This spring’s research will help divers and other project staff make detailed plans for summer dives to the Terror wreck site.

Divers also plan to continue exploration this summer of the Erebus wreck, found in the Queen Maud Gulf near the Adelaide Peninsula south of where the Terror was found.

“The discoveries of the HMS Erebus and HMS Terror would not have been possible without the many contributions of Inuit and their generous sharing of Inuit knowledge over the 10-year search for the lost Franklin wrecks,” the Parks Canada news release says.

“The Government of Canada values the contributions of all partners to the search and looks forward to ongoing partnership with Inuit of Nunavut and the Government of Nunavut as we work together to develop a deeper and richer understand of this important part of our shared history.”

That partnership seemed, at times, strained or at the very least befuddled. But now that the two ships have been found, researchers are keen to begin unravelling the 171-year-old mystery of their disappearance and the death of 129 crew members.

The wrecks of the Erebus and Terror were designated a national historic site under the Historic Sites and Monuments Act in 1992, long before they were ever found.

Until an Inuit Impact and Benefit Agreement is established, the Franklin Interim Advisory Committee advises Parks Canada on management of the wrecks.