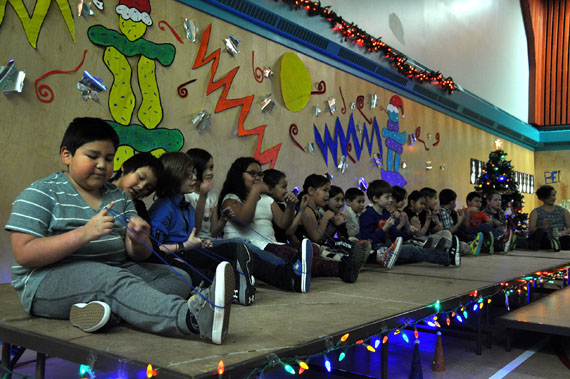 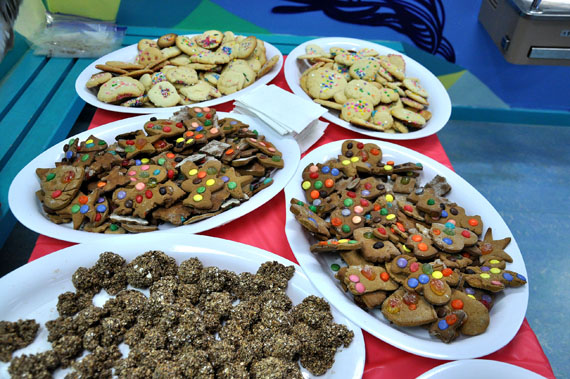 These plates of delicious cookies prepared by the Nanook Cooking Club made it all worthwhile. (PHOTO BY THOMAS ROHNER) 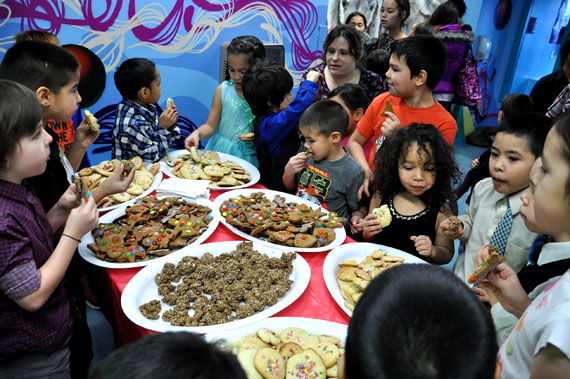 Kids from the Nanook Cooking Club swarm the cookie table with their schoolmates after their Christmas concert Dec. 14. (PHOTO BY THOMAS ROHNER)

The children at the Nanook Cooking Club, run out of the Apex elementary school, learned a valuable lesson this holiday season: patience in the face of delicious cookies.

For three or four weeks leading up their school’s annual Christmas concert, held Dec. 14, the 20 or so members of the club baked different cookies in preparation, said Kerry McCluskey, a parent who helps run the club.

“The kids haven’t had one cookie. So they’re really looking forward to eating them. It’s maybe been a bit torturous for them, but you’ve gotta prepare,” said McCluskey Dec. 14, just before the concert.

Right after the 20-minute concert ended, the children swarmed the cookie table, most of them holding at least one cookie in each hand, finally able to enjoy the fruits of their labour.

But patience is only one skill that those in the club have learned over each of the past three years of the club’s operation.

It’s all part of an overall healthy lifestyle approach that the club tries to teach, McCluskey said.

“We try to hit all the different angles: food preparation, healthy eating, exercise and literacy, by reading and writing out recipes.”

As was the case last year, this year’s club members will make some educational field trips in the second half of the school year, McCluskey said.

They will visit and cook at the soup kitchen, tour the commercial restaurant at the Frobisher Inn and spend time in a grocery store to compare the ingredients in a home-cooked meal made from scratch to the processed food that comes out of a box.

And the club has also been lucky to work with some guest cooks visit this year, like one parent who taught the children how to make palogos—pogos made with bannock dough, palauga.

“This year we’re building on our infrastructure and were able to buy some hot plates through a donation we received last year. So we’ll learn some soups and stews, broadening the kids’ skills development,” McCluskey said.

It’s a bit “nerve-wracking,” she added, but the hot plates are the safe kind that are not hot to touch.

“We’ll have them adding ingredients and stirring the pot to bring it up to a hot enough temperature. And they’ll work in smaller groups of two or three kids per work station. That way they get more hands-on experience, and nobody will feel left out.”

Once again, funding for the club was provided by the City of Iqaluit, which may include multiyear funding, McCluskey said.

The Apex parent is also eyeing to expand the cooking club to other Iqaluit schools but that will depend on whether parents at those schools are interested helping out since it’s entirely volunteer-run.

“I never anticipated that the club would be as successful or popular as it’s been. It’s the kind of thing you’re never going to be able to stop doing because you see the impact it has on children and you can’t take that away from them.”