Peregrine to sink another $15 million into diamond mine near Iqaluit 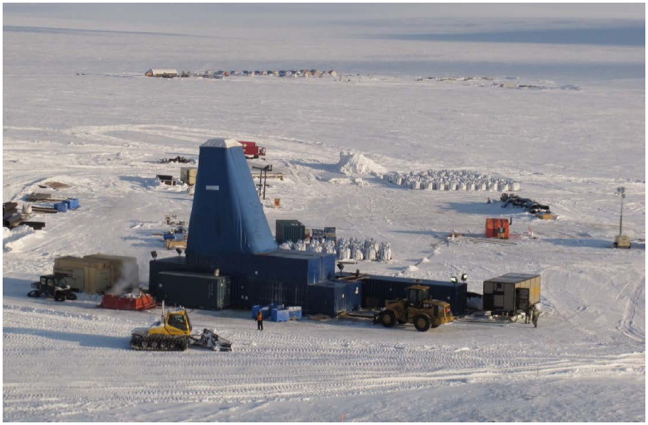 A specialized Arctic drilling rig (in blue) with the Discovery camp in the background, at the Chidliak property. Peregrine Diamond’s Ltd., which owns the Chidliak operation, plans to conduct another winter season of drilling and bulk sampling at the site near Iqaluit. (TECHNICAL REPORT 2016 PHOTO) 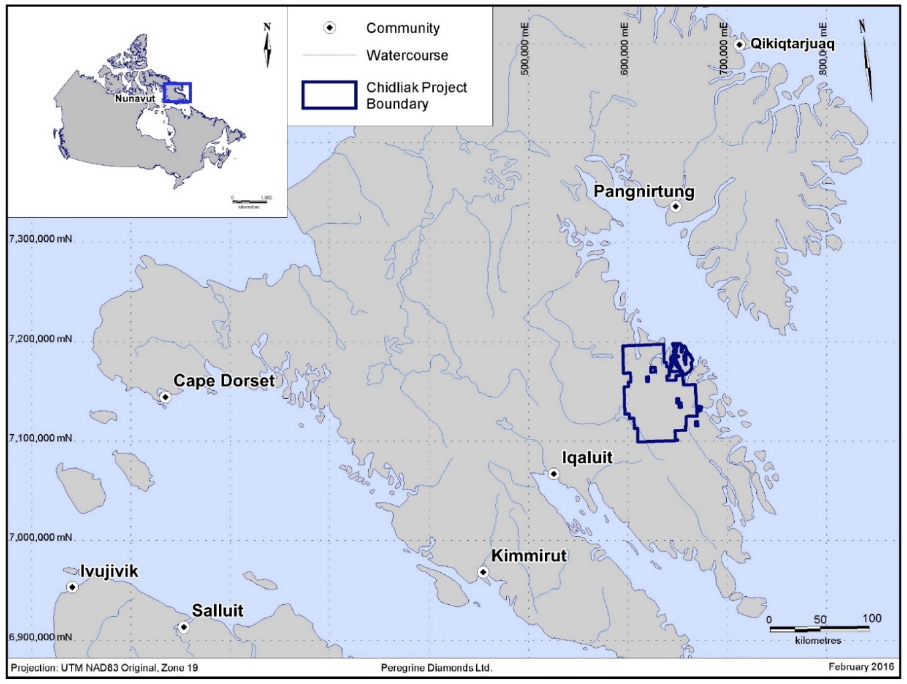 A map showing where the Peregrine’s Chidliak diamond drilling operation is located. Peregrine is still doing exploratory drilling at this point in the hopes of one day operating a full-scale diamond mine. (TECHNICAL REPORT 2016 PHOTO)

With a promising new mineral resource estimate in hand, Peregrine Diamonds is planning roughly $15 million worth of core drilling and bulk sampling work at its Chidliak property near Iqaluit next winter.

The mineral resource estimate, a technical report prepared for Peregrine by Vancouver’s Mineral Services Canada Inc., was submitted June 3 and is required to satisfy laws of disclosure under the Ontario Securities Commission.

The highly detailed, 239-page report concludes that there is “a significant increase in the size of the declared mineral resource at CH-6,” one of the kimberlite pipes assessed at Chidliak, as well as a “maiden mineral resource declaration at CH-7.”

A chart for the combined CH-6 and CH-7 kimberlite pipes states that these likely contains 9.64 million tonnes of material with an estimated 1.62 carats per tonne, above the 1.18 millimetre grade cut off.

Previous mineral resource estimates, in 2014 and 2015, suggested the CH-6 kimberlite contained 7.47 and 8.57 million carats, respectively, but the most recent estimate in June suggests CH-6 might contain 11.39 million carats.

Hence the “significant increase” — it’s apparently enough of an incentive for Chidliak to continue drilling and bulk sampling at the site which lies about 120 northeast of Iqaluit on the Hall Peninsula. A breakdown of this winter’s $15-million drilling and sampling plan is contained in that resource report.

But the report cautions that “all reported mineral resources have been classified at an inferred level of confidence; accordingly, significant uncertainty remains in these estimates with respect to grade and diamond value.”

The report recommends more core drilling and sampling at both CH-6 and CH-7, “to provide a basis for more confident estimates of average diamond value.”

The property comprises 577 claims covering more than 564,000 hectares of land, accessed primarily by helicopter from Iqaluit, though the report notes that when ice and snow allow, the project can be accessed via the “Iqaluit-Chidliak winter trail” on which equipment and supplies can be transported.

So far, Peregrine has discovered 74 kimberlites on its property since diamond exploration began there in 2005.

Prospecting permits were first obtained by Peregrine in 2007 and the first claims staked in 2009. Those claims are on Crown land so the company pays no royalties to Inuit.

Claims were once owned by Peregrine and BHP Billiton jointly until December 2011 when Peregrine announced it had purchased BHPB’s 51 per cent interest in the Chidliak property to become sole owners.

As a result of environmental and archaeological studies on site since 2009, 91 previously unknown archaeological sites in the area have been registered with the Nunavut government.

In every year but 2015, both caribou and carnivore surveys have been conducted as part of environmental baseline studies.

The site holds four field camps of temporary seasonal construction consisting of wood or metal-framed tent structures. Power is provided by small diesel generators and drinking water is pulled from lakes and streams near the camp.