“As a government, we simply cannot afford mega-projects here in Nunavut” 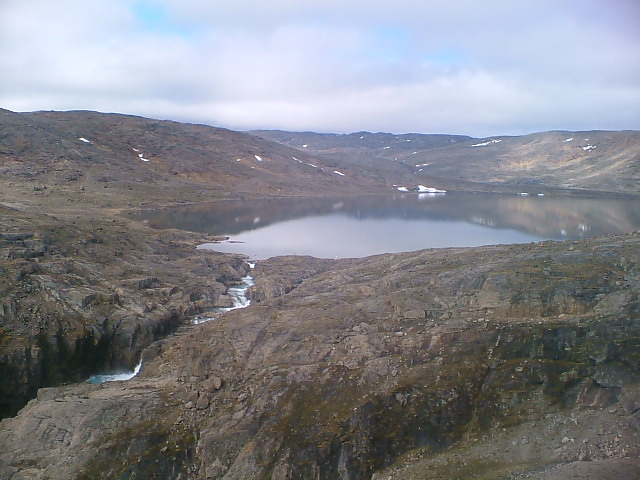 Upper Lake at Jaynes Inlet, about 80 km south of Iqaluit, a site the Qulliq Energy Corp. once contemplated for a hydroelectric project. But those hydro plans are now on hold and the minister responsible for the QEC, Keith Peterson, says Nunavut “simply cannot afford mega-projects. (FILE PHOTO)

Iqaluit-Tasiluk MLA George Hickes dreams of a greener Nunavut with more alternative energy, but Keith Peterson, minister responsible for the Qulliq Energy Corp., stymied those dreams May 27 during a question period exchange at the legislature in Iqaluit.

And on May 26, the first day of the spring sitting, Peterson tabled the energy company’s response to a legislative standing committee report that reviewed the company’s 2012-13 annual report and its 2014-18 corporate plan.

“Presentations were made to the QEC board in December 2014 concerning private sector opportunities to fund and develop alternative energy sources (hydro and tidal),” Hickes quoted from the tabled document.

“Can the minister update the house today in more detail as to which direction Nunavut is heading with respect to these alternative energy sources?” Hickes asked Peterson.

Peterson replied that proponents who presented on hydro and tidal energy to the QEC board had to promise energy at costs that are either the same or less than Nunavut’s current costs.

“The tidal energy I would say is an immature technology — it hasn’t been well-tested around the world. I’m not convinced it would work here. And hydro energy, as we know, is very expensive. It’s in the neighbourhood of $250-million to $500-million to build,” Peterson said.

“Currently the hydro project work is more or less on hold and we’re not going anywhere with the tidal energy.”

But the QEC document tabled May 26 also says “funding options within debt limitations” are being explored for a feasibility study on a Nunavut hydroelectric project, Hickes said.

Hickes asked if the federal government’s recent decision to increase Nunavut’s debt cap to $650 million might help a hydroelectric initiative in Nunavut.

“With the [Iqaluit] airport project, and our current debt, we’re close to $400-million of existing debt. $250 million is not enough debt to pay for a $500-million proposed project,” Peterson replied.

“As a government, we simply cannot afford mega-projects here in Nunavut.”

But that proposal had not had feasibility study at the time of the presentation.

Arviat South MLA Joe Savikataaq received slightly better news from a minister when he asked May 27 about plans for hydroelectric energy in the Kivalliq region.

Savikataaq asked Monica Ell, minister for Nunavut’s Department of Economic Development and Transportation, for an update on plans to run a road and hydroelectric power lines from Manitoba into the Kivalliq region.

Ell said her department is taking the lead for the GN in the discussions, along with the departments of Community and Government Services, Executive and Intergovernmental Affairs, and the QEC.

But the actual leads in the project are the mayors of Churchill, Manitoba, and Arviat, Ell said.

A “scoping study” began on April 1 for the project and is expected to take 20 weeks, Ell added, but said she couldn’t provide any more details right now.

“I truly believe we need a power line from Manitoba to the Kivalliq,” Savikataaq said.

The GN renewed its commitment to this project last November at a meeting of Hudson Bay regional governments.