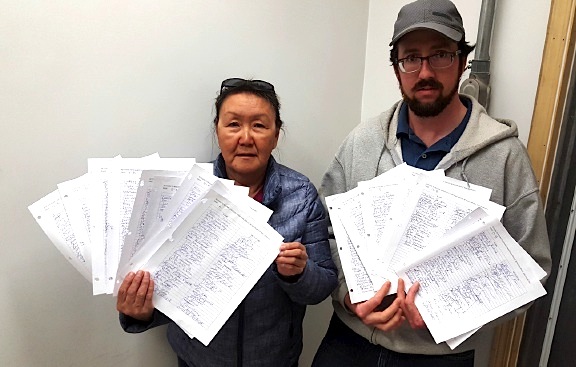 It may seem illogical to fly north to head south—but that’s what people who live in the central Nunavut town of Arviat must do in order to travel to Winnipeg in Manitoba.

And they tired of the long travel-time and delays due to transferring to southern flights in Rankin Inlet.

That’s why hundreds of people in Arviat have signed a petition that asks for Calm Air International, the only airline that serves their community of roughly 3,000, to resume flights from Arviat to Churchill, Man., which were cancelled a few years ago.

A petition led by John Main and Simona Baker has been signed by 544 voting-age Arviat residents who said they want ro see a resumption of direct flights between Arviat and Churchill, about 260 kilometres to the South, instead of flying about 200 km north to Rankin Inlet first.

“We have had overwhelming support for this petition, and people really want to see a change,” Main said in a release about the petition.

And that leg of the journey is often accompanied by a two- to eight-hour wait in Rankin before finally boarding the jet to Winnipeg, the petition says.

The petition says the north-then-south flight routing is both inconvenient and exhausting for Arviat residents and that it causes medical travelers and the elderly to endure hardship.

And sometimes, travelers get stranded in Rankin Inlet en route.

“I worry about our elders and medical travelers who have to wait so long and suffer through delays,” Baker said in the release.

The petition has been sent to both Calm Air and its parent corporation, Exchange Income Corp., which recently saw its cargo contact with the North West Co. cancelled.

“We appreciate the service offered by Calm Air, and all the support that they provide for community events. We believe that the company cares about our town. This petition is about improving their service and meeting customers’ needs,” Main said.

Calm Air recently saw an extension of two years to its medical travel and duty travel contracts with the Government of Nunavut.