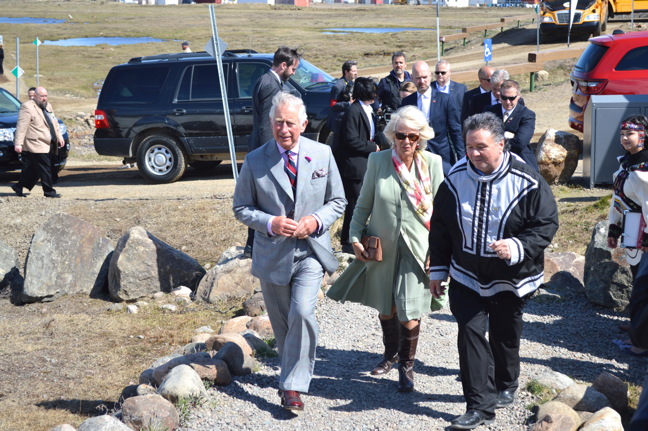 Nunavut Premier Peter Taptuna leads Charles, Prince of Wales and his wife, Camilla, the Duchess of Cornwall, up a gravel trail into Sylvia Grinnell Territorial Park, June 29, as part of a busy afternoon of visits around Iqaluit before the royal couple makes their way through to Ontario for the 150th anniversary of Confederation and Canada Day. The day was high on procedure, with motorcades shuttling the Prince and his wife around to various events—and buses of local media and the British press—so it should be no surprise that the stress of the day tripped up even the most seasoned veterans. “We are simply delighted to see you again, and to have the opportunity to greet you in Nunavik,” the Governor General of Canada David Johnston misspoke in his opening address on the steps of the Nunavut Legislature. Charles, however, seemed unfazed, and even attempted some Inuktitut sentences ahead of his first speech of the tour, to much applause from the roughly 300 people in attendance. “I have never forgotten the warmth of the welcome from the Inuit people, which made me feel instantly at home, as indeed I have with all Canadians on my subsequent visits,” he said from the podium, reflecting on his first visit to Canada nearly 50 years ago. See more photos on our Facebook page and read more about the visit later, on Nunatsiaqonline.ca. (PHOTO BY STEVE DUCHARME)