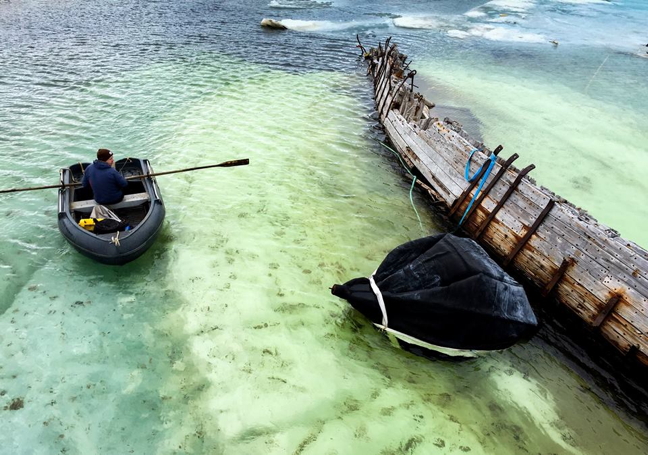 Waiting for a lift; Norwegian explorer Roald Amundsen’s Maud ship, which sank off-shore of Cambridge Bay in the winter of 1930-31, lies frozen in ice in June 2016. A group from Norway, lead by project manager Jan Wanggaard, is back in Cambridge Bay this summer for a second attempt at raising the ship using industrial strength inflatables, placing her on a barge and towing her back to Norway. “I don’t know if Maud has slept this winter or if she has kept one eye open wondering what was really happening last summer, after all these years in silent solitude,” Wanggaard wrote on his blog Maud Returns Home. “Does she feel a slight excitement, just like we do, sensing something deep in her belly?” He wrote that the team has spent the winter refining their engineering plans for lifting the Maud. It’s likely that, once raised from the water, the Maud will overwinter in Cambridge bay to “freeze dry” so the earliest possible departure for Norway appears to be summer 2017. (PHOTO COURTESY MAUD FACEBOOK)