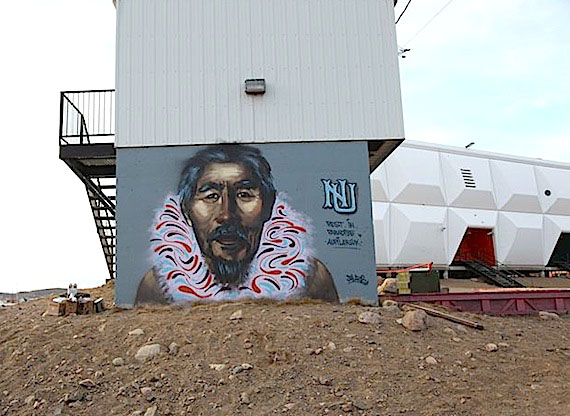 This mural of Mariano Aupilardjuk now decorates the side of a building near Nakasuk School in Iqaluit. Iqaluit artist and designer Jonathan Cruz created the mural this past weekend to honour the learned Rankin Inlet elder, who died Sept. 21 at the age of 89. Aupilardjuk was a carver who contributed to the official mace of the Nunavut legislative assembly, a drummer and storyteller, and actor in the film the Snow Walker. He also spoke at schools, Nunavut Arctic College and advised the RCMP. Aupilardjuk wanted the world to understand more about Inuit and their traditional knowledge. “‘Isumamainapunga,’ that’s the only thing I think about,” is how he puts it in “Diet of Souls,” a documentary by John Houston. Among other awards, Aupilardjuk received a National Aboriginal Achievement Award in the category of Heritage and Spirituality in 2001, the Ron Wiebe Restorative Justice Award in 2006 and an honorary degree in education from the University of Prince Edward Island in 2009. (PHOTO COURTESY OF J. CRUZ)