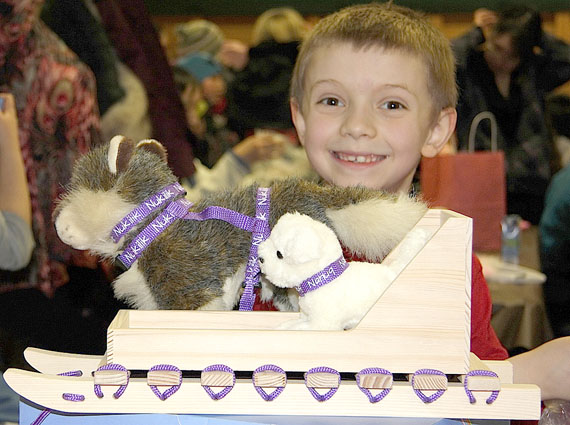 Cameron Gillard of Cambridge Bay grins after winning this toy komatik and sled dogs in a silent auction held March 31 at the Luke Novoligak Hall in Cambridge Bay. Money raised by the silent auction and auction at the event — more than $5,500 — will go towards the “Walk of Hope,” which will see six women, including Nunavut Commissioner Edna Elias and Cambridge Bay Mayor Jeannie Ehaloak walking across the Coronation Gulf in May 2012. “By walking they are reminding themselves that healthy bodies and minds are built a step at a time; hope is built a step at a time and that a cure for cancer can be achieved by the combined steps of many,” an earlier news release on their walk said. Proceeds from the walk and fundraising events before the walk will be donated to the Alberta Cancer Foundation to support the Edmonton Cross Cancer Institute and breast cancer research. (PHOTO BY RED SUN PRODUCTIONS)