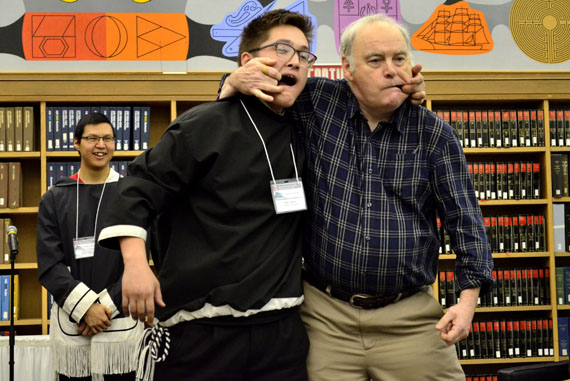 Cheeky behaviour: Gabe Klengenberg of Kugluktuk, a student at the Nunavut Sivuniksavut college program in Ottawa, and Murray Angus, a former instructor in the program, engage in a fierce face-pulling contest March 1 at Library and Archives Canada, at an event held to mark the 15th anniversary of Project Naming. Nunavut Sivuniksavut started Project Naming in 2002, when they began asking NS students to help identify Inuit represented in thousands of archival photographs held at Library and Archives Canada. Since then, more than 2,000 previously anonymous Inuit have been identified and more than 8,000 Arctic photos have been digitized. Read more later on Nunatsiaqonline.ca. (PHOTO BY JIM BELL)