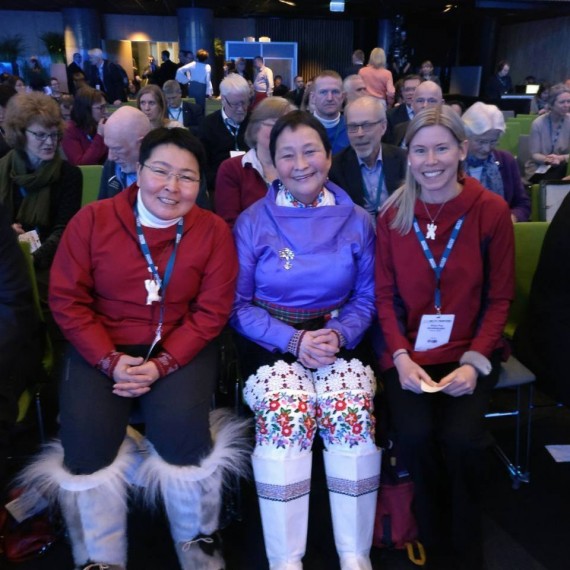 Toku Oshima and Lene Kielsen Holm of Greenland and Shari Fox Gearheard of Clyde River, Nunavut are all smiles Jan. 22 after accepting this year’s Mohn award in Tromsø, Norway at the Arctic Frontiers conference. The Clyde River-based “Siku-Inuit-Hila/Sea Ice-People-Weather” project team will share the Mohn prize with Dr. Eddy Carmack, whose research focuses on the Arctic Ocean and its interactions with climate, land and ecosystems. Funded by the United States National Science Foundation, the Siku-Inuit-Hila project took place from 2006 to 2011, producing scientific papers, professional presentations and a book: The Meaning of Ice, People and Sea Ice in Three Arctic Communities.” The team’s mission was to document sea ice observations from three different Arctic locations and cultures—in Barrow, Alaska; Qaanaaq, Greenland; and Clyde River, Nunavut. Judges said the project “made groundbreaking contributions to our understanding of Arctic ice-dominated systems via a highly innovative combination of natural science, social science and indigenous knowledge.” The prize is worth two million Norwegian krone, which translates into about $155,000 for each of this year’s winners. The Norwegian prize is named after Henrick Mohn, the founder of Norwegian meteorological research, who served as the director general of the Norwegian Meteorological Institute from its inception in 1866 until 1913. (PHOTO COURTESY OF S. GEARHEARD)