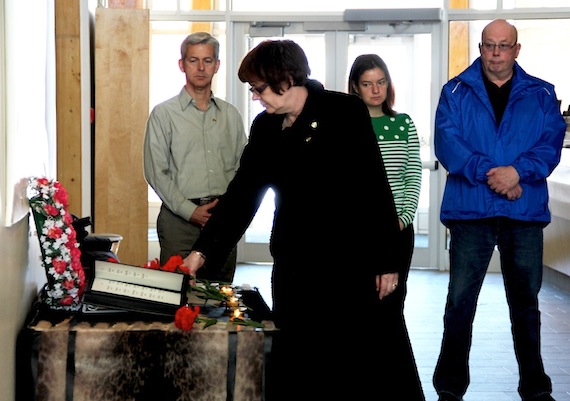 A woman lays a flower April 28 at a ceremony in Nunavut’s legislative assembly in Iqaluit to mark the National Day of Mourning for workers killed or injured on the job. In 2012 in the Northwest Territories and Nunavut, there were four workplace-related fatalities. Flowers or wreathes were layed in their memory April 28. Those listed by the NWT Federation of Labour from 2012 included: Leo Lamontagne, Coral Harbour; James Essery, Prosperous Lake; Earl Canadien, Big Sage River, Fort Providence; and Ralph Leslie Creed, Yellowknife. “It is with no less sadness that we read names at today’s ceremony, to remember the one man in Nunavut and the three men in the Northwest Territories…to the families, coworkers, employers, and communities, we offer our condolences,” said John Vander Velde, the vice-chair of the Workers Safety and Compensation Commission’s governance council. (PHOTO BY SAMANTHA DAWSON)