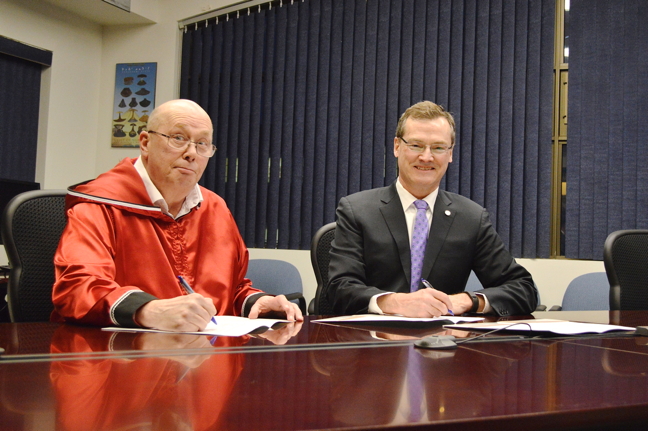 That’s a wrap: Nunavut Minister of Finance Keith Peterson and Nunavut Employees Union President Bill Fennell sign a new collective bargaining agreement for Government of Nunavut employees, in Iqaluit, Nov. 23. The CBA, retroactive to October 2014, will give employees wage increases of two per cent, one per cent, one per cent and two per cent in each year of their contract. Retroactive pay for employees hired since 2014 will be delivered in instalments, Peterson said, with the first cheques sent out “before Christmas.” The agreement will also replace Winter Bonus Days with Holiday Closure Days, on the request of the NEU, as well as standardized hours across correctional facilities and a new MOU for employees working 12-hour shifts. After signing, Fennell smiled, saying that the deal was “good, not great, but good.” Minister Peterson thanked the NEU for a bargain well-struck and also voiced his satisfaction with negotiations. (PHOTO BY STEVE DUCHARME)